The Illinois football program has gone through a boatload of shambles since its Rose Bowl appearance in 2008, but now, 14 years later, things appear to be changing.

After a disastrous hire with athletic director Mike Thomas, the Illini went through allegations in the women’s basketball and football programs that left fans wondering if there was any hope in sight.

Enter Josh Whitman, a former tight end turned lawyer and athletic director, who the school hired in 2016 to clean up the mess.

While the wins and regular season titles have come in other sports, in football they have not. As a recent Illini graduate, I can say that there have been a lot of really sad and unfortunate Saturdays over the last few years, but I feel like times are changing in a really big way.

Entering the 2022 offseason, second-year head coach Bret Bielema was finally able to inherit his team. He hired Barry Lunney Jr. to fix the offense, brought in a stable transfer quarterback in Tommy DeVito, and is keeping weapons like Casey Washington and Luke Ford to maintain a balanced attack.

The defense is younger, but has some promise, as it saw Kirby Joseph Jr. enter the Draft in April. Stars like Jamal Woods and Keith Randolph will return to anchor a unit that has struggled in the redzone and ranked 111th in the FBS in points allowed. It will be interesting to see which of the underclassmen step up come August. 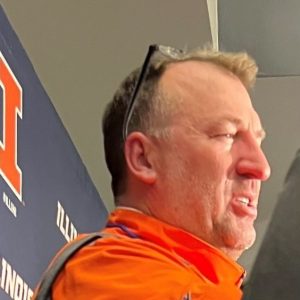 Looking at Illinois’ schedule, it’s favorable to start off. After getting Wyoming in Week 0, they travel to Indiana for the first time in nearly a decade before rematching Virginia, a team who trounced the Illini just a year ago.

If Illinois can start 4-0 before traveling to Madison for a rematch with Bielema’s old squad, that is a big deal. Again, six wins will get Illinois a bowl game.

Some other notable games include a home date with Iowa Oct. 8, Michigan State Nov.  5, and Michigan Nov. 19. Steal one or two of those “upset alert” games and the team should be booming with confidence.

Year 2 is a big one for Bielema. If the turnaround continues, it won’t be too much longer before the Illini are back in the national conversation again.