Why Illinois is the Perfect Fit for 5-Star Enoch Boakye 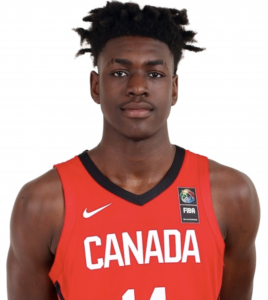 Earlier this week, Enoch Boakye, the 6’10 240 pound 5-star post prospect decommitted from Michigan State. With Kofi playing so well, and potentially earning his way into at least a 2nd round pick in the NBA draft, selling Boakye on taking those minutes as his own should be a priority. It won’t be an easy task of getting him to Illinois with the recruiting dead period extending even further, reaching out to gauge his interest would be wise - particularly with most of the Illini's post targets already off the board.

While his 240 pound frame isn’t anywhere close to Kofi's size, Boakye would physically be the biggest recruit to arrive in Champaign since Meyers Leonard. At 6’10", he could play both the 4 and 5, but he will probably be better suited at the center given his playing experience. He has shown he’s best offensively at facing up in the short corner or at the mid-post and taking his man to the basket.

While there isn’t much tape of him shooting from deep, his form is sound and it shouldn’t be an issue that will hinder his development. With more reps, he has to potential to develop his outside shot into a strength moving forward. This is a key as the NBA prioritizes bigs that can shoot.

He already has the ability to dribble well on the fast break. He also has a couple quick one-on-one moves in the half court that aren't what is expected from a big with his size.

As a defender, he will need to improve as a shot blocker. Like many young bigs, he attempts to block everything he thinks he can reach. In college, this habit will get him into foul trouble and lead him to sitting more often than he would want to sit. Getting more discipline to keep him staying on the ground and not swatting downward on block attempts comes with time. Most post players don’t have that patience coming into college. Coach Antigua has proven with Kofi's improvement that he can help Boakye improve on this aspect of his game.

After watching how Coach Izzo has been utilizing Michigan State post players this year, it’s not surprising that a player of Enoch's caliber would choose to decommit from the Spartans. Barring any Michigan State players transferring out, the Spartans will have 6 players in a literal logjam at the 4 and 5 positions.

Sophomore Malik Hall, was expected to be more of a 3 but hasn’t developed his perimeter game - and he is now become more of an undersized 4. Freshman Mady Sissoko, Junior Marcus Bingham Jr, and Sophomore Julius Marble have all gotten less minutes than expected. While their results on the court aren’t perfect, it’s hard to blame the kids when they aren’t allowed to get into any sort of rhythm before being pulled. Juniors Joey Hauser and Thomas Kithier have been given minutes recently. These two juniors seem to be the direction Izzo has chosen for the time being. Both of these players are absolute liabilities defensively, so it will be interesting to see if Izzo sticks with them as the season progresses.

Since decommitting, Enoch has heard from/been offered by Kentucky, Duke, Gonzaga, Arizona, and Texas Tech. There are some impressive teams on that list but there's a lot of players fighting for playing time at the 4 or 5 position.

This means the teams that are perceived to have a "prestige advantage" over the Illini won’t exactly have easy paths to early playing time for Boakye. Some are as stacked up as the Spartans are and that was the catalyst for him to decommit.

We realize this is a bit of fantasy recruiting, but the Illini could pitch a couple of scenarios for Boakye:

It's a long shot, but no matter what the circumstances, if Boakye wants to play next season, the Illini are a good choice for him. Will he see it that way? Time will tell.