Astros bounce back in Game 2 to even World Series

Orgeron says LSU can't practice due to too many injuries

Cardinals star Watt likely out for the season

Braves pitcher out after suffering broken leg on batted ball

Both Illinois athletics director Josh Whitman and head football coach know the importance of building a solid relationship and that bond is already forming. 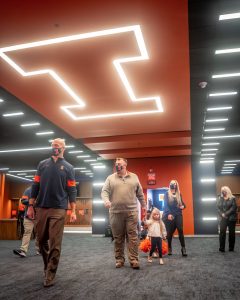 CHAMPAIGN, Ill. -- During a prospect’s official visit to a college campus, it is common for the head coach to play the role of the closer.

However, if it involves Illinois football, head coach Bret Bielema has more than suggested that his boss serves as the closer for a recruit and his family.

After the prospect tours the entire Smith Family Football Center building, Bielema doesn’t let the prospect or his family leave without sitting down with Illinois athletics director Josh Whitman so the former four-year starter at tight end from 1997-2000 can sell the full Illini experience.

“The Friday (of an official visit weekend) is really an introductory period to who we are,” Bielema said. “By the time we go to have dinner with (the prospect and his family) after a long day, that shows you the built-in benefit of a Josh Whitman.”

The comfort level of Bielema allowing his boss - who also spent parts of four seasons in the National Football League, was a two-time first-team Academic All-America selection and is a University of Illinois Law School graduate - to sometimes wrap up an official visit should give the public an honest indication of the instant relationship between the Illini’s athletic director and their new head football coach. 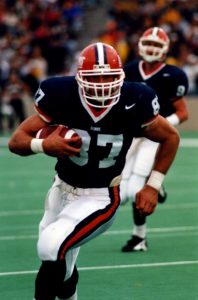 Josh Whitman is that rare athletic director at a school where he once starred on the field. (Courtesy Daily Illini)

“My athletics director has spoken to every single one of our official visit groups and whatever we ask him to do, he’s there,” Bielema said. “The power of that message is huge. That talk (to recruits) really ticks something with those parents and we build it up throughout the day. I talk about it constantly and Josh Whitman delivers.”

Bielema has had a legendary figure at every college stop of his career. As a player and assistant at Iowa, Hayden Fry is still seen as the standard for which all leaders in Iowa City are judged. As a defensive coordinator at Kansas State, Wildcats head coach Bill Snyder served as an important figure in Bielema’s career, At Wisconsin, Bielema’s boss, and the man he eventually took over the Wisconsin program from, was College Football Hall of Fame selection Barry Alvarez, who still holds the Badgers all-time wins mark.

“From the moment I came to the University of Wisconsin to the moment I left, Coach Alvarez and I were on the same page every single day,” Bielema said in an exclusive interview. “He was somebody who was heavily influential in my life.”

At Arkansas, Frank Broyles has his name on the stadium playing surface in Fayetteville, Ark., and Broyles passed away during Bielema’s final season with the Razorbacks.

What Bielema has never had in his career is an athletics director who has the experience of putting on the jersey of the school and can translate what that experience means for teenagers trying to decide where to spend the next few years of their college experience.

Whitman, who has now made two head football coach hires in his five years at the helm of Illini athletics, spoke last Wednesday in his annual media roundtable about the relationship he’s quickly built with Bielema.

Whitman first met Bielema for a face-to-face interview in New York just days before being named the 26th head coach in the 132-year history of the program. If anybody around the University of Illinois knows how important and secure the relationship between an athletics director and a head football coach has to be, it’s Whitman.

“To me, it’s critical,” Whitman said. “The athletic director and the head football coach, and the head basketball coach, need to be very much in lockstep. Those are two relationships that I invest a great deal of time into and have a tremendous appreciation for.”

Whitman had a more than solid relationship with his first head coach hire, Lovie Smith, who he named to the position on Whitman's first day as Illinois athletics director following a recommendation from his former Illini head coach Ron Turner.

After five seasons that included a 17-39 overall record, one bowl bid (2019 Redbox Bowl loss to California) and no winning seasons, Whitman ultimately felt he had no choice but to change course on his very first hire as a leader of the Illini athletics department.

“I have tremendous respect for Coach Smith and will always be grateful to him for providing a steady, experienced hand at a time when our program required stability. His unshakeable leadership, never more needed than during this pandemic, will be forever remembered,” Whitman said in a university statement. “Nonetheless, based on extensive evaluation of the program’s current state and future outlook, I have concluded the program is not progressing at the rate we should expect at this advanced stage in Coach Smith’s tenure.”

During the spring months as both Bielema and Whitman prepare for a 2021 football season highlighted by a return to full crowds following constant coronavirus protocols, Whitman said Wednesday his reasons for hiring Bielema have been confirmed. 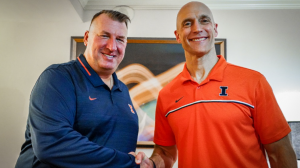 “It started with the staff that he hired,” Whitman said. “I am so impressed with the people he was able to recruit here to join him as members of this coaching staff. I think it speaks volumes to the reputation he has and the relationships he has across the country. People want to come here and work with him.”

Whitman was also impressed with Bielema’s ability to instantly connect and convince at least 20 players he’d never previously met before to return to Champaign for their fifth or sixth year of eligibility.

“They had a lot of options,” Whitman said. “For them to make a decision collectively to come back to this place, to leave their mark, to continue to cement their legacy, that doesn’t happen without him casting a strong vision in front of them of what this future looks like and making them want to be a part of it.”

Whitman frequently attended Bielema’s 15 spring practice sessions and was instantly reassured the work being done at Memorial Stadium was further proof he’d made a solid choice of the program’s leader.

“The players are really buying in,” Whitman said. “One thing that has really impressed me about Bret is just his ability as a teacher and sometimes I think we lose sight of the fact that our coaches, more than anything else, are teachers. He would stop spring practices and provide context to what they were doing and directly relate it to how it would come up during a game.”

Of course, Bielema would be and has been the first to admit with media that he’s clearly still in the honeymoon phase of a new coach who “still hasn’t lost a game yet”.

The true test of Whitman’s second choice of Illini head football coach will start on Aug. 28 when the Illini host Nebraska (12 p.m. CST, FOX) in front of what they hope will be a full capacity crowd and a national television audience.

“I’ve really enjoyed being around him. I’ve spent as much time with him as I can and tried to be visible and present,’ Whitman said. “(The players) are excited. They’re having fun playing football. They’re enjoying being around each other.”

I on the Illini - 9OT Fighting Illini Victory Over Penn State (S1, Ep60)

I on the Illini - Wisconsin Breakdown and Open Men's Basketball Practice Discussion (S1,Ep57)