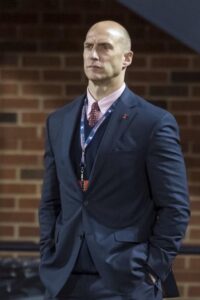 Some things just have to be said.

I can only imagine the frustration this week within the Illinois athletic program, borne not just of recent events but stemming from weeks of head-scratching decisions made in the Big Ten offices.  If you're coming out of a long slumber, the early issues are pretty well documented here:

So, let me say this:

We at IlliniGuys.com fully support Illinois athletic director Josh Whitman and his efforts to gain a "co-champion" status for his Illini men's basketball team.  His open letter to the Illini family released late afternoon Tuesday was a well-crafted explanation of his efforts in the past couple of days as well as a not-so-subtle hint at what he plans to do next.

Information regarding the rescheduled (and cancelled) Michigan games has been spotty at best, but from what we can gather, it may not be the Wolverines' fault that they failed to play a full 20-game conference schedule.  At the same time, it's a testament to Illinois that they did play all 20 games; no matter how many times their schedule was altered, no matter how often they had to change travel plans and game strategies, they were there every time the ball went up at center court.  Furthermore, should Illinois be penalized for winning 16 of the 20 games?  The most wins in the league this season?  A record so lofty that the Illini actually finished a half game ahead of the crowned champion Wolverines.  A Wolverines team that they whipped so badly in their lone meeting that pundits had to go to the record books to find the last time a highly-ranked team was beaten that severely.  At home.  With Illinois' best player injured and in street clothes.  So much for head-to-head results.

There is a lot to discuss here and we do just that in our latest "I On The Illini" podcast.  We go a little deeper into the issue and talk about what it means for the Illini program in the here and now as well as down the road.

We applaud Whitman for standing up for his student-athletes.  We remain hopeful that the Big Ten will stand up for all of theirs.