"We're Just Getting Started!" -- The IlliniGuys Look Ahead to Year 2

Happy New Year!  We hope 2022 is full of many blessings for each one of you!

Remember the original Alien movie?  The ugly little thing with the silver teeth bursting out of John Hurt's chest and standing only about five inches soaking wet, but later that day as the crew went to hunt him down he'd grown to seven feet tall.

That might be one way to describe the IlliniGuys' growth.  From zero to 60, preschool to college, tricycles to 10-speeds, sippy cups to chopsticks and steak knives...the past 11 1/2 months has been a crazy whirlwind.  Exciting, nerve-wracking, perplexing, exhilarating, educational, eye-popping, unexpected, informative, and fun -- all would describe what this experience has been like from our perspective.

Since most of you joined us sometime after our launch on January 12th, you should know this little project began with one simple question: 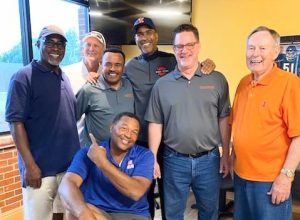 The IlliniGuys' first mixer gave our members the chance to rub shoulders with Illini legends Stephen Pierce (seated), Craig Swoope (first row on the left), and David Williams (standing center in the back) among others at Papa Dels in August. IlliniGuys Larry and Mike (center) are pictured with IlliniGuys subscribers Del Ryan (standing 2nd from left) and Chuck Cagley (standing on right). (Photo courtesy Larry Smith/IlliniGuys)

"Would you consider being a publisher?"

I'd known Mike Cagley for several years after meeting on another Illini-centric site and getting together occasionally to share our love for pizza and the Orange and Blue.  He'd had the idea for years about trying his own site, but it wasn't until I announced I was cancelling my membership on that other site that he reached out.  (He has since said that he kicks himself regularly for not saying something sooner!)  That one question put a series of events in motion and the result...well, you're here, aren't you?!

IlliniGuys Chris and Karl shared our passion and so did Brad Sturdy, the pre-eminent Illini insider.  As a group, we clicked and never once argued as we shaped what we felt this site should be; each guy adding his unique perspective (we come from five different backgrounds and have excelled in five different careers) and never dismissing the others.  A media veteran, sales executive, career educator and coach, lawyer, and surgeon -- all bound by orange and blue thread!  We were so busy and having so much fun that we never even assigned work titles!

We had a simple growth goal:  get 300 subscribers by year's end.  Well, we blew past that number in March.  In doing so, more doors opened and the possibility of growing faster became a reality.  We added staff to improve our football coverage and develop our social media presence.  I had put the idea of a syndicated radio show in front of the group early on as a possible project for year three or four, but we decided to take a chance and accelerate that schedule.  Knowing how passionate Brad and Mike both were, I was confident that it would be a hit.  I told the group in May that I thought ten stations would be a fantastic start.  In the span of two months, Mike amassed the IlliniGuys Radio Network of nearly 25 stations reaching six states.  Overnight, the idea became a force.  20 shows, 40 hours of programming (not counting the daily IlliniMinute heard on stations throughout the state and Midwest), and dozens of interview guests later, the IlliniGuys Sports Spectacular has established itself as a great vehicle to hear from interesting guests and get Illini insider information each week.

I asked Mike a few days ago about when he first thought about a radio show and his answer was surprising:

"The IlliniGuys Sports Spectacular idea’s origins go all the way back to me mowing the lawn in high school listening to Loren Tate and Jim Turpin on Saturday mornings. I always wondered why there wasn’t a statewide syndicated Illini show. Fast forward to the future and not only did Larry and the guys think it would work, but Larry found a way to do it much sooner than anyone would’ve imagined."

Comically, around the time Mike was pondering his query while keeping the Cagley landscape well-manicured in Mahomet, I was living out a fictional world as a teenager about 50 miles away in Mattoon.  With no knowledge that this could be a career and long before I began honing my craft behind a microphone and in college classrooms, my friends and I had created a fictional university - the U of I and its sports teams were the blueprint - that was located in tiny Allenville, Illinois and we recorded fake radio shows about the school's athletic achievements on my boom box. (Its star player led the team to the NCAA basketball title and he won the Heisman in football) I still have the tapes in my attic.

So when we say this fulfills a lifelong obsession, we really mean it.  The owners of this site work tirelessly around the clock for no pay.  Our passion for Illini sports has no bounds.

And we're just getting started.

I could have written all of the above on New Year's Day 2024 and we would have been very proud to do so.  But to have witnessed all of this transpire in less than a year is beyond remarkable.  It's a testament to our fantastic and committed staffers and to our members.  They bought into the idea that we can have a space to talk and debate about sports.  We will disagree, but we're not going to delve into the abyss of name-calling and silly political spats that pollute other sites.  Compared to what I have seen and witnessed elsewhere, we have very few issues.  Our subscribers are incredibly enlightened and extremely witty -- rarely does a day go by that I don't peek in the message forums and read something that makes me laugh.  They believe in and support what we are trying to do and we are grateful for that.

I can't get into all the details of what we have in store for 2022, but trust that it will be fun.  In year one, we gave away a stay at a Maui resort, Cubs tickets, Illini football tickets, Christmas gift cards, stylish golf shirts and sweatshirts and cash and there will be more of that to come.  This spring, we will award our first IlliniGuys scholarships to a pair of deserving students. And again...we're just getting started.

We were ahead of the game with Alfonso Plummer's recruitment and the plans for super seniors Trent Frazier and Da'Monte Williams (who has joined the IlliniGuys Sports Spectacular radio team!) to return this season.  When Kofi was "flirting" with Kentucky, Sturdy was telling our members that he would stay. There was so much more, but that's just to name a few.  Our football coverage showed the greatest growth through the year and that continued expansion is a priority in 2022.

We've heard reports of others in this space getting access to our premium info that our members pay to have exclusively.  We hope they give credit to where they've gotten that if they do pass it on.  But what a testament to the hard work of the IlliniGuys staff and community...a newcomer to the game that has info and insight that no one else has.  I can guarantee you that I canceled my memberships to other sites and can count on one hand the number of times I've visited their front pages in the past year.  I'm not worried about them.  What are we doing?  How good is our content? How fresh and how varied is it?  Are we telling good stories?  Are we solid in our perspective?

I've done this for more than 30 years.  If you made a list of the world's biggest sporting events and the biggest names in sports, there's probably a 90 percent chance I've covered or interviewed them.  But nothing has compared to this.  To see this concept grow with exponential speed, to see a large group of strangers come together behind an idea and go the extra mile to protect it has been nothing short of awesome.

Thanks to everyone who took the time to read this.  Thank you to our staff for your boundless enthusiasm and talent. Thank you to our membership community - present and future - for helping to shape this into what it is today.  Let's go out and make a difference!