Illinois has added its first transfer portal piece to the 2021 football recruiting class in the form of Virginia Tech pass rusher Alec Bryant. 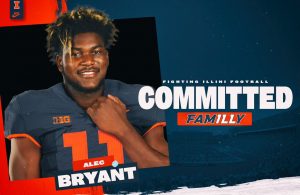 Bryant, a 6-foot-3 and 240-pound athlete from Pearland, Texas who only saw action as a true freshman last season in the Hokies’ season-finale win over rival Virginia, announced the move to the Illini on social media Tuesday afternoon while the 2020 Illini team was conducting its eighth preseason practice this month.

Bryant is believed to be the first high school prospect from the state of Texas to sign with Virginia Tech but reportedly entered the transfer portal on July 12.

Due to NCAA rules, Bryant will likely need a waiver to participate in this upcoming 2021 season. However, Bryant will be able to practice with the Illini throughout the season and upcoming spring and be eligible to compete in games during the 2022 season as a redshirt freshman.

Bryant, who is the younger brother of Indiana defensive end Alfred Bryant, was rated by 247Sports.com as the 17th-best weakside defensive end prospect and 47th best overall prospect in Texas in the 2020 recruiting class.

Gabe Brooks, the Midlands Region recruiting analyst for 247Sports.com described Bryant in 2020 as a possible “multi-year starter at Power Five level” and added that Bryant was a “productive edge defender who is more long than tall (with a) stout build perhaps more reminiscent of a linebacker. Could be viewed as a 'tweener at four-man end or odd-front standing edge defender, but likely possesses enough length to add requisite bulk.”

Once the super seniors leave the Illini program, Bryant will likely either be asked to help out a depth issue in Bielema’s program at either defensive end or outside linebacker.