Illinois head coach Bret Bielema believes local and national media took his Monday comments out of context while also claiming he was not addressing the current roster. And he’s correct and incorrect at the same time.

CHAMPAIGN, Ill. -- The intercollegiate tackle football program at the University of Illinois and its chief executive officer got caught up this week in a national news cycle based on a two-word idea that has slowly become an unequivocal fact: Conflict sells. 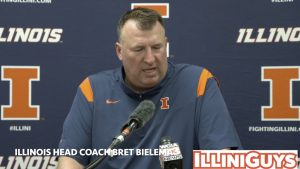 In what will likely need to filed under the category of “Both Things Are True”, Illinois head football coach Bret Bielema feels that, while being quoted accurately, some of his comments about the rebuilding of his future Illini roster from his Monday media conference were “were completely taken out of context” by tweets from local reporters that received a lot of national attention. Bielema says he responded to this viral news item by showing the exact words including the question and his entire answer to each member of his football team.

“Certain positions haven’t probably played out the way they envisioned them to, in particular the offensive line. I don’t believe we have a player in the two-deep that they’ve recruited here over the last three years that is really significantly doing anything for us in the playing department and that’s a major concern,” Bielema said Monday.

“As this roster continues to transition, I’ve got to make tough decisions. The players have to make decisions. The roster is going to have to change to get to where we want to be to win a championship,” Bielema said Monday. “I recognized that probably midway through the spring last year, through the summer.”

In his attempt to talk about recruiting, junior college recruiting and the rebuilding of a football program that hasn’t had a winning season in a decade, it’s become relatively obvious Bielema stumbled into the new two-word reality of “conflict sells” without likely having any intention of doing so. And with contention being currently assessed as the most desired commodity by the greedy, foolish and short-sided in the news business, it’s nearly an impossible task to simply answer a question without being forced to take a side and defend that position.

“I think the thing that unfolded Monday was overly shocking to me,” Bielema said during his Thursday media conference via Zoom. “They’re my words. I said them, but they were completely taken out of context through people on this call or people that aren’t here. Unfortunately, that’s the world we live in. I think anybody that knows me — and fortunately for us, our players really know me — those were really taken out of context. Someone had asked me a question about what we did during the bye week, and I was talking to them about recruiting,” Bielema said Thursday. “Another question was asked about recruiting in the future. It was not a question about our current roster when I answered it. It had nothing to do with our current roster."

Let’s be clear about two things. One, a local television reporter tweeted out an accurate video that lasted one minute and 12 seconds of Bielema’s answer to a question about improving the roster via recruiting.

Two, the person who sent off a tweet that began with “Well that might be as SHOTS FIRED as Bielema has been in a press conference”  is somebody who actively markets himself as an Illini fan first and foremost who just happens to have been issued a media credential by the University of Illinois. Therefore, as always, evaluating the source of anything on social media is always suggested in situations like this.

It also might need to be noted that, in 2021, a person of Bielema’s stature is apparently expected to answer a reporter’s question by attacking something or blaming somebody else. Current societal norms dictate he must be on one side and then something, somebody or some idea must be on the opposite side of the imaginary dividing line of conflict in order to create the 2021 definition of news. So, of course Bielema had to be verbally burying the fired Lovie Smith with his comments on Monday, right? Wrong. Here’s the situation. Everybody locally has seemingly taken their opportunity to publicly or privately tar and feather Smith and his coaching staff now that all of them (except running backs coach Corey Patterson) have left town.

This tactic has ranged from petty to unprofessional to downright ugly. And it seems everybody needs to take their shot at the Lovie Smith dunk tank. Everybody that is...unless your name is Bret Arnold Bielema. Like him or not, and based on even the message board contempt right here on IlliniGuys.com following his fourth down decisions there’s certainly a contingent of local folks who have an instant distaste for the man, Bielema has addressed Lovie Smith and the previous coaching staff with nothing but respect, class and dignity.

You can trust me when I tell you I’ve seen it in that profession go the other way much quicker and on its best day, it’s still distasteful. Since being hired last December, when Bielema has been asked to address issues that constantly plagued Smith’s five-year tenure in Champaign (from in-state recruiting failures, a perceived vanilla Cover-2 defensive scheme and a seemingly unwillingness to interact with the local community), Bielema has used a version of this quote: “I can’t address what happened before I was hired”. Trust me, I’ve typed it while transcribing 10 months of Bielema quotes several times and understand that the word “can’t” in that phrase is intentional. It could and should be interpreted as Bielema saying it would be out of line, dishonorable and unbecoming of him to publicly critique Smith. Bielema’s approach in this situation reflects the professionalism and class Smith also exemplified by not referring to the clownish antics and debilitating actions of his predecessor, Tim Beckman.

“I’ve said this a million times over the phone already to parents and players who we’re recruiting currently but I can’t control anything that Illinois has done or been in control of in the past,” Bielema said back in January. “All I can do is control what we are in the future.”

And that last line of a quote given by Bielema 10 months ago was the basis of what he was asked about and attempted to answer Monday - The future.

Here’s hoping the results of this week doesn’t materialize itself in the “conflict sells” world we live in by having Bielema be on one side of a line and local traditional media being on the other side constantly doing battle in a fight where nobody will win.