Take Two - Underwood ‘Over my damn dead body will that happen again.’

CHAMPAIGN, Ill. -- Anyone suggesting Brad Underwood would have to consider strategic changes, lineup changes or playing time changes can disillusion yourself with that notion right now. 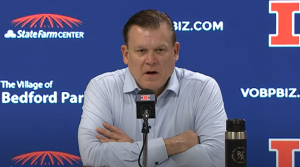 The Illinois head coach has a message for his team, the rotation of players who saw the floor on Friday night at Maryland and the leadership in the Illini locker room.

“We had no fight,” Underwood said of the 81-65 loss at Maryland on Friday. “And over my damn dead body is that going to happen again.”

However, any changes coming to how Illinois defensive handles opponents while facing No. 10 Michigan State (15-3, 6-1in Big Ten) at home Tuesday night (6 p.m., ESPN) potentially without Kofi Cockburn should not be anticipated by fans as well.

“We’re doing the same things,” Underwood said. “We’re not changing. We scheme for every opponent. We had to make some changes early when (Andre Curbelo) was out because we knew he’d be out for a while but at this point, we’re status quo. We’re doing what we do. We just got to do it better. And we gotta do it harder and we got to fight.”

With fifth-year senior captains Trent Frazier and Da’Monte Williams on this roster and healthy enough to play, Underwood said Monday he was confident No. 24 Illinois (13-5, 6-2 in Big Ten) had enough veteran leadership to make sure the effort would be there for the remaining 12 league games on the schedule.

“We went through this Maryland game last year too with that same team here and that locker room is rock solid,” Underwood said. “Everybody was in the facility on an off day either watching film, working on their game or getting an extra lift. That’s our culture.”

Cockburn did not travel with the team to Maryland and has been in concussion protocol for the last several days. On Monday afternoon, before his team’s final practice session before welcoming the current Big Ten Conference leader to State Farm Center, Underwood was non-committal to the status of his 7-foot, 290-pound center.

“Everything we do in our medical procedures, I don’t have any control over,” Underwood said. “I’m going to see here at 2:30 p.m. [for practice] where he’s at in that process and go from there. I have no say. I don’t even ask. I don’t talk to our medical professionals. We have a procedure put in place by our department and we have to follow that to the guidelines. I don’t even ask.”

When asked if he would consider tweaking how Illinois covers opponents defensively without the presence of Cockburn should this injury persist through a few more games, Underwood quickly shot down that notion as well.

“Kofi is impactful on both ends. There’s a reason we play the way we play and when you don’t have that, we’re not going to reinvent the wheel in one game,” Underwood said. “We’re not going to change what we do. That just doesn’t work. That’s not fair to everybody else that because one guy is gone, we’re gonna just scrap everything we do. They didn’t hurt us with ball screens. They hurt us because we weren’t in our gaps and literally weren’t active.”

Underwood also said that Illinois was dealing with more injury issues beyond Cockburn as Curbelo was feeling flu-like symptoms and hadn’t practiced in the subsequent days following the team's return from Maryland late Friday night. Frazier also took what the Illini coach called “a horrendous fall” in the practice just a day before the Purdue game and had been inactive for practice over the next three days.

Benjamin Bosmans-Verdonk told local media Monday that he’d be prepared to make another start vs. the Spartans frontcourt after making his first career start at Maryland but Underwood said he’s already stressed his disappointment in the 6-foot-8 Belgian native’s effort on the glass.

“I thought we’d get more from Ben and I told him that in film [session]. Only one rebound? He gets that in his sleep,” Underwood said. “He’s been rock solid. He’s earned [this opportunity] because he doesn’t make mistakes and he’ll be a big part of what we do moving forward.”

Take 2 - Underwood had Fire in His Stomach

Champaign, Ill. - Today’s (Monday) press conference with Illinois head coach Brad Underwood may have been one of his best ever.

After back-to-back losses to Purdue and their dismal performance against Maryland, Underwood let loose today.

Coach Underwood gave all the analytics about where his team is offensively, defensively, and where they need to be.

But today's message: "Fight," Underwood said, "We didn't have any fight against Maryland; over my damn dead body if that will happen again while I'm here at Illinois."

Illinois had a chance to keep moving up the Big Ten rankings but instead laid an egg.

Sure, several players were still sick or hurt. Example: point guard Andre Curbelo did not practice yesterday (Sunday), experiencing flu-like systems, and had a 100.6 temperature Friday against Maryland.

From the day Underwood got the job, he always talked about culture and what that can do for a program.

"I'm not worried about last year; we have to have Trent (Frazier) elite, Da'Monte (Williams) elite, we have seen the fight in Luke (Goode); we will get back to doing those things. You know what you're going to get when you play Tom's (Izzo) teams. His teams are good at what they do. They make adjustments. They are going to run and try to get easy baskets," he said.

Izzo's teams played hard; they are physical, they do not run or pretend it is not a part of their DNA.

"Tomorrow night we have to bring the fight to the way they did to us last year," he said.

Let us be honest and fair to Underwood--not making excuses, but the man has not had a full roster yet or a week when he was able to have everyone participate. Taking away Curbelo and Cockburn, two All-Americans, will affect any team.

He closed with this statement and said see everyone tomorrow night. He recited Andy Reid's comments about yesterday’s (Sunday) football game between the Kansas City Chiefs and the Buffalo Bills: "When things get grim, be the grim reaper."