Here are the 25 incoming freshmen basketball players across college basketball that will have an impact this season. We've started at #25 and counted down to #16. Now, it's time to move from #15 t0 #6.

Sallis will be primarily playing at the shooting guard position at Gonzaga next to Nolan Hickman, Andrew Nembhard, and Iowa State transfer Rasir Bolton. While he has a slight build and will need to continue adding muscle in the weight room, he has a frame that will support that over time. What he currently brings to the table is a natural ability to score the ball at the rim, in the mid-range with a variety of floaters, or at the three-point line. Defensively is where he will need to prove himself at the college level in what looks to be his lone college season if things go according to plan. 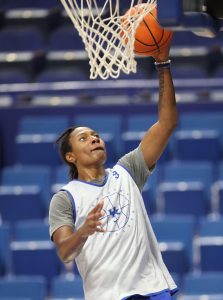 Washington shot up the recruiting rankings last winter and early spring. He will be bringing his highly touted skillset to Kentucky. Long-term for his professional aspirations, he will likely play on-ball as a point guard. Next year at Kentucky, however, he won’t need to be thrust into that role. This could ultimately help him as there will be less pressure in this regard with Sahvir Wheeler playing a majority of the minutes at that spot. As a secondary playmaker, Washington can take advantage of a defense that is already behind on their rotations. This is where he can showcase his creative passing skills and his end of the shot-clock heroics.

Illini fans may remember Ty Ty as the talented PG who flirted with the Orange and Blue, but shied away from competing with All-America candidate Andre Curbelo for playing time and ended up running with the blueblood Wildcats.  Earlier this fall, Ty Ty stirred the pot with a diss of the Illini via social media. If you take that drama and add in the hiring of former Illinois assistants Orlando Antigua and Chin Coleman to Big Blue Nation earlier this spring, you can almost guarantee these two programs will find themselves in the same NCAA tournament bracket come March. 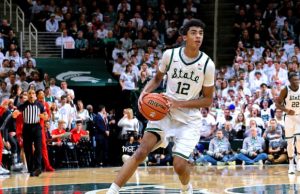 With Aaron Henry leaving Michigan State early last season for the NBA, there should be plenty of opportunity on the wing for Christie. While he won’t bring as much defensively as Henry did, Christie is one of the best floor spacers in this entire class. At 6’6”, he should be able to shoot over smaller defenders with ease. Christie isn’t an uber-athlete, but has good body control and good touch around the basket. Defensively, he has potential, but he isn’t the quickest or strongest athlete so there may be a learning curve for him as a freshman.

Max Christie played for the Illinois Wolves and never appeared to have much interest in playing for the Illini. One wonders had Max had been a few years younger, would seeing this iteration of the Illini program led by Brad Underwood be enough to change his perception of the program. Sometimes, timing is truly everything.

Ingram will follow in Zhaire Williams’ footsteps as an elite freshman at Stanford. He may be less polished than Williams offensively, but he is more well-rounded overall. He is a tremendous leader and will bring a defensive edge that few freshman bring to the game. He should improve as a shooter to be establish himself as a blue chip prospect for the next level. In addition to being a good defender he shows plus ball-handling and playmaking skills for a power forward. He should also be an impactful rebounder on both ends of the court.

Davison is going to be joining Alabama’s loaded back court. He will most likely be starting alongside Jaden Shackelford and Jahvon Quinerly so it will be unclear how many minutes he will be getting at the point guard position which he will be aligned at the highest level. His ball handling and shooting will need to improve, but he has a good baseline in both areas. His true strength is his dynamic athleticism. This makes him electric as an above the rim finisher and in transition. Defensively, he should be able to make solid contributions as well due to his quickness and instincts.

Houstan will be a part of a freshman class that will have to replace Franz Wagner’s and Isaiah Livers’ production on the wing for Michigan. Houstan, who was voted onto the Big Ten's preseason all-conference team, shows promise as a jack of all trades type player on the wing. He can space the floor from the three, is a good cutter, and scores well in transition. He’s also shown signs of being an elite on-ball defender and he will need to excel at all levels if Michigan is to compete with fellow Big Ten frontrunners Illinois and Purdue. His biggest opportunity to grow is his ball handling and shot creation with the ball in his hands. If he can improve in this area he should solidify himself as a lottery pick.

Brown will be joining the reigning national champions at Baylor University next year. Right now, he profiles as an athletic three man that shows versatility both defensively and in transition. He is potentially the most athletic of all the wings in this entire class. This shows as he is a high level lob catcher and one of the more creative finishers at the rim. His ball handling and jumper still need work, but he has shown flashes that give scouts hope that he can develop long tern in these aspects of his game. Baylor likes using multiple guards in their line ups, so this may provide an opportunity for him to get some time at the 4 as well.

Chandler has the potential to be the most dynamic of the point guard prospects in this class. He will be playing what is, most likely, his single year of college at Tennessee under Rick Barnes. Chandler is lightning quick and plays with the ball on a string at all times. He still needs to improve as a shooter, but it is not a serious weakness for others to exploit – at least at this level.  His biggest opportunity is putting on weight and getting stronger. He may be challenged by certain matchups defensively, but his lateral speed and quick hands will allow him to be a pest for opposing ball handlers. Another area that he should be dynamic is on the fast break as he can get up and down the court with ease.

Watson will be a high-level combo wing for the UCLA Bruins this year. It will be interesting to see how Mick Cronin is able to work with Johnny Juzang, Jamie Jaquez, Jr., and Jules Bernard with Watson in the mix. There is plenty of size and versatility here and Watson has the highest upside of them all. Very rarely do 6’8” players have as quick a first step as Watson. That, along with his improving ballhandling and outside shooting, makes him a tough matchup for the majority of the wing defenders. His opportunity right now is to put on weight as his current weight could be a disadvantage against stronger players in the post. That said, his long-term NBA potential rivals that of anyone in this class. 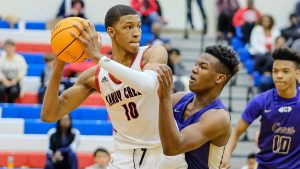 Smith is going to be the next in a line of “one and dones” to attend Auburn University. He will be playing most of his minutes at the power forward position alongside UNC transfer Walker Kessler. If necessary, he may even be able to play some minutes as a small ball 5. At 6’10” with a long wingspan, he shows promise as a defender and a shot blocker. He also shows polish in his half court offensive skillset as he has a good face-up game, an array of stepbacks, and the ability to finish at the rim over smaller defenders. While not consistent yet, his jumper extends all the way to the three point line and he looks fluid while doing so. For him to take his game to the next level, his ball handling will need to improve and he will need to be more comfortable moving without the ball in his hands.