The Farrell Report - Focus on the Defense 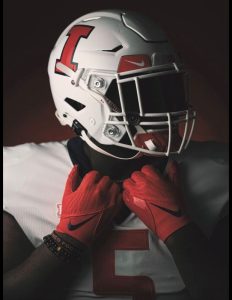 As I dive into the recruiting efforts of the Illini for the 2023 season, I’ll continue with the commitments on the defensive side of the ball and whether I feel they’re ranked accordingly out there in the recruiting space. I’ll go more in-depth on each player as we move forward.

DT Jamarrion Harkless — Harkless is a natural nose so he fits well in a 3-4 scheme, but he could also play in a 4-3 but I don’t know if he’d be more effective. He is excellent against the run but doesn’t chase that well, so I’d have him as a mid 3-star due to a lack of versatility.

DE Patrick Farrell — Motor isn’t a question and technique is improving but how good an athlete is he? That’s the question. He’s long and has raw skills and he’s a physical kid but right now I’d say low 3-star and he’s more of an effort kid.

DE Mason Muragin — I like Muragin better than most and would have him as a high 3-star. He’s not overly long but he has a very good first step and he has a frame that will add muscle and that will improve his play against the run. You can’t teach speed around the corner and use of hands, and he has both.

LB Calvin Smith — Smith is a 3-4 linebacker fit for the Illini with good length and speed and he plays well in space. He closes well but needs work on strength and hands. He’s a mid-level 3-star.

LB Kaden Feagin — Feagin is a freaky athlete and is either a massive one cut running back for Bret Bielema or an athletic 3-4 linebacker who could play inside or outside. Based on his athleticism alone he’s a 4-star but more so as a defensive prospect.

LB Antwon Hayden — Hayden is an inside 3-4 linebacker in the Illinois scheme who runs well in short spaces and is very physical. He’s a hard hitter and takes on blockers but he’s also skinny when he needs to be. His top end speed to the outside is the question mark and keeps him as a high 3-star to me. 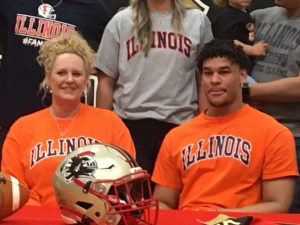 Kaden Feagin (right), a 2023 four-star prospect from Arthur, Ill., made his decision public to verbally commit to Illinois on March 23, 2022 with his mother Jennifer (left) both revealing orange and blue Illini shirts underneath their jackets during his announcement at the Arthur High School gymnasium. Matt Stevens/IlliniGuys

DB Kenari Wilcher — He has speed and that’s key and he could also be a wide receiver and impact on special teams in the return game. He’s not overly physical as he needs to get much stronger, but his speed is elite especially closing. But he’s still raw as a DB so he’s a low 3-star to me.

DB Jaheim Clarke — Clarke is tall and skinny and could also play wide receiver and be a return man, but I like him on defense because of his length. His technique is all over the place especially tackling but the athletic skills are high end. He’s a mid 3-star to me.