The Big Ten-ACC-Pac 12 ‘Alliance’ Has No Current Coherent Leadership, Plan of Action and Needs Immediate Help

Everything from Tuesday’s rollout suggests the leadership of this Big Ten-ACC-Pac 12 ‘Alliance’ should scare everyone who wants it to succeed.

This is going to surprise and possibly disappoint my bosses at IlliniGuys but I’d like to immediately begin employment within the Big Ten Conference, Atlantic Coast Conference and/or the Pac 12 Conference.

Based on what I and millions of people witnessed on live television Tuesday afternoon, it’s clear your public relations departments are failing you in a massively embarrassing way. I’d like to be part of a solution to stop this nonsense before the hole these organizations have already dug themselves in the eyes of public opinion turns into a massive ditch they can’t drive out of.

Therefore, I would like to formally offer my services for a position I would title as President of Common Sense. 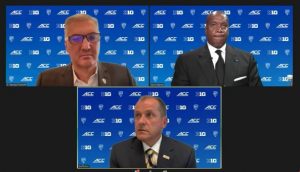 My pitch: Simple. I will personally guarantee that what happened Tuesday can not and therefore will not happen again as long as I’m employed. We can talk salary, office hours, location and other details at another time as it has become apparent that all three of these organizations aren’t concerned with having a plan finished before making a public decision or declaration.

What is also clear is nobody can ever erase the 45-minute debacle of Big Ten commissioner Kevin Warren, ACC commissioner Jim Phillips and Pac 12 commissioner George Kliavkoff sitting in a televised Zoom meeting looking like The Three Stooges of College Athletics.

Before any of those three gentlemen want to ask for live television time to announce anything anymore, the new President of Common Sense (me) would like to review it so their image is best received by the viewing public. The review process would be very quick and elementary in nature where the following questions would need to be answered.

In short and simple terms, the answers of these four questions for this public rollout of the Big Ten, ACC and Pac 12 ‘Alliance’ would have been:

And if that is the case following a review by the league’s Common Sense Department, a live television announcement would obviously not be allowed to take place to protect the public relations image of the organization.

Following the 45-minute television press conference, if you’re able to learn specific plans of this ‘Alliance’ on any of these issues then quite frankly, you’re a much smarter and better person than I. This trio of rookie commissioners had no concrete answers, no signed agreement (which is just staggering when you consider Warren and Kliavkoff are licensed attorneys) and were not properly prepared to announce this partnership.

Imagine being Illinois athletics director Josh Whitman, who holds a law degree from his alma mater and remains a licensed attorney, Tuesday and you’re watching two fellow attorneys and your long-time friend Jim Phillips talk about how legal documents are completely unnecessary for these types of partnerships.

“If you have to go back and look at a contract that you signed, then you probably entered a deal with the wrong parties,” Warren said Tuesday.

I’m thinking if there was a moment somebody like Whitman might have thought he was in the process of having a stroke, that was it.

By the end of this clown show, I did learn two things.

And I’m sincerely happy for them because in these trying times of mental health and turmoil, it’s important to find people to trust and get along with. I’m just not sure that when you’re in charge of organizations producing a combined figure of over a $1 billion in revenue, live television time might not be the best avenue to declare you’ve made a new friend.

And look, I get it. When you’re not invited to a party or dumped by a significant other who you thought you could trust, it does hurt. But again, the new President of Common Sense (me) would love the opportunity to be able to be the impartial party to say “Mr. Warren, Mr. Phillips and Mr. Kliavkoff, I know you’re angry and that’s a natural, human reaction. You have a right to feel that way. But until we can put together a coherent plan to counter this move, I can’t see how spending 45 minutes of live television time saying things like 'It’s about trust. We’ve looked each other in the eye & made it an agreement', isn’t in our best interest."

CBS Sports called this rollout “short on details but long on philosophy”. Yahoo! Sports was left to do nothing but speculate on “what could it ultimately mean for Big Ten, Pac-12 and ACC?”. Correct me if I’m wrong but if an award-winner reporter like Pete Thamel is left to simply provide educated guesses to the meaning of what this thing you just spent 45 minutes talking about on live television is then maybe, just maybe, that television time wasn’t spent in the wisest possible way, no?

In what is clearly now a battle of college athletics supremacy, Greg Sankey and the Southeastern Conference have already put plans, signed contracts and completed measures in place to make their organization stronger. The Big Ten, ACC, Pac 12 have rookie commissioners with ideas, shared values and hurt feelings toward their colleagues from the Deep South. My promise to you these three men is I’ll resign my position of President of Common Sense before I let you go on television and make utter fools of yourselves again. Enough is enough.