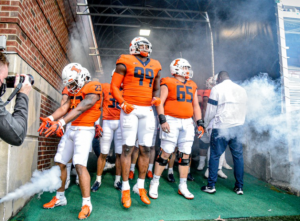 Future Illini football teams are already taking on a different look than the current or past squads. (Courtesy Illinois Athletics)

It seems so far-fetched that I have a hard time even writing it.

In his recruiting class for the fall of 2020, Lovie Smith and his staff didn't have a single scholarship player come to campus from the state of Illinois.  Not one.  And even as Smith and his assistants were busy recruiting for the class of 2021, still there were no in-state players committed to the Illini at the time of his dismissal last December.  If this was lost on the Illini faithful - and in many circles, it wasn't, it's a phenomenon that Illinois high school coaches and players knew very well.

Pouring salt into the festering wound was that Smith managed just 17 wins in his five seasons as head of the Illini football program.  Maybe Illinois products could have helped win more games?  Hard to imagine that they could have produced less!

If the bridges between the Illinois prep programs and the Fighting Illini weren't completely burned, they were at least badly singed and heavily damaged.  Mark Grounds, Jacksonville High School's veteran coach and leader of the Illinois High School Coaches Association, knew a restoration project was in the works when Bret Bielema called from his hotel room shortly after he was hired as Illinois' new head coach.

“He called me that morning after getting the job”, says Grounds.  He told me about himself and asked about my journey as a head coach. The thing that really stuck out to me the most was that he was just as interested in listening to my story as I was to his. He truly tried to gauge what the perception was of Illinois football by the high school coaches and by our association.”

Grounds says that he couldn't help but get excited when considering the credentials of the long time coach coming to town.

“This guy is a true college football coach that had really developed players at Wisconsin and had competed very well at Arkansas.”  It sometimes gets lost that Bielema guided the Razorbacks to three bowl games in five years.  He fashioned an 8-5 record in season three while competing in what is considered the toughest division in college football.

Now, at this point we have all heard of the term “coach-speak”. It’s very common amongst newly hired head coaches. They come out and  have all of these propositions about how they will change the face of the program, but how well do they keep them?  Will Bielema break the mold?  That’s the question.

“He said he was going to work hard reaching out to the entire state as soon as the staff was finalized. He also said he would make Illinois a priority”, Grounds says. 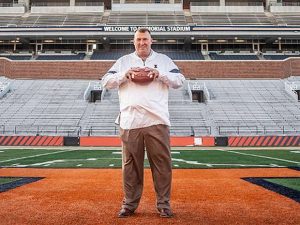 Coach Bielema didn't waste any time making good on that promise and immediately began targeting Illinois athletes. Not even a week after completing his staff, they reached out to every single high school program across the state of Illinois. The new cadre of Illini coaches were anxious to rebuild and shore up as many bridges as possible. Their efforts were well received.

“We are excited to have a guy in there that gets what relationships are about,” Grounds says. "In normal years, I think they (Illinois HS coaches) would have flocked to Champaign for spring ball, but with COVID and our spring season, a lot of the in-person relationship building had been put on hold“

When I asked Grounds if he felt as if Bielema kept his promises,  he said, “All the way. I think he and his staff have worked hard to recruit back his current players as well as gain the momentum with the state's high school coaches."

Here is where we get to the treacherous part. From working with coach Grounds for a very long time, I can tell you from personal experience that he is all about loyalty. He will always help you if you are true to your word. But with Illini football ignoring homegrown prep talent for such a long time, is it now safe to trust that program again?  One of the biggest tests of trust is when a coach decides to send you one of their star athletes. From a coach's standpoint, you have developed a strong, almost fatherly relationship with your student athlete and now you have to place that same trust in another coach. I asked coach Grounds if he would send one of his young stars to be an Illini and to play for coach Bielema.

“I would be comfortable sending one of my players to this program. I have in the past. What the true orange and blue Illinois fan needs to understand is the exodus out of the state under the former coach was not because of those kids not being able to play or develop. That regime treated so many of them as outsiders. Look at how few players left under Coach B (this spring). He’s embraced them as his own because they are.”

And look at the number already on the way next year.  Hank Beatty of Rochester, Iroquois West's Clayton Leonard, Brother Rice star Henry Boyer, and just this week Malachi Hood pledging to join his Joliet Catholic classmate Jordan Anderson in Champaign-Urbana next fall.  With bridges being rebuilt and now their strength tested and with renewed excitement and energy infused into Fighting Illini football, there’s only one thing left to do for coach Bielema and this Illinois football program:

From a coach's standpoint, Grounds believes Bielema and his staff have the tools and the talent to do just that.

“Success is in the eye of the beholder. As a coach, I never put glass ceilings on what types of success a person or team can have or achieve. I think he will have the facilities and resources to compete. That is truly the first step. Competing. The second step is competing consistently. Those are definitely achievable at Illinois and I believe he will be very successful.”

There's no question the vibe around Illinois football is much better than it was just a few months ago. The new regime has yet to oversee a single snap of competitive football, but improvements have already been made. Now we get to watch and enjoy the construction project unfold to refurbish a program that will hopefully, finally feel like home to our best homegrown talent.