”The best Deuce Spann he can be is at wide receiver”: How an ‘ah ha’ Moment Between Bielema & Isaiah Williams Led to Spann’s Big Catch vs. Nebraska

A conversation in the first week of August between Isaiah Williams and Illinois head coach Bret Bielema led to Deuce Spann’s 45-yard catch Saturday in the win over Nebraska. 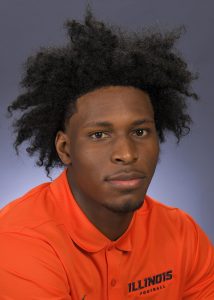 CHAMPAIGN, Ill. -- You might be able to credit Isaiah Williams for recruiting Gregory ‘Deuce’ Spann to join him in making the switch from quarterback to wide receiver.

Among all the things Williams has provided on the field for Illinois, including leading the team in targets and receptions Saturday in the 30-22 victory over Nebraska, Illini head coach Bret Bielema said Monday Williams was the closer on selling Spann to switch this season from fourth or fifth-string quarterback to a specialized receiver position in this 2021 preseason camp.

Illinois offensive coordinator Tony Petersen confirmed Monday that Spann had fully transitioned into the wide receiver position room for meetings and would be working at that spot under the supervision of position coach George McDonald during practices for the rest of the season.

“Just with his speed through spring ball and through the summer we wanted to find a way to get Deuce on the field right away,” Petersen said.

Bielema said Monday the coaching staff had approached Spann, a 6-foot-4 and 195-pound athlete, during summer workouts before preseason practice had started about moving to an outside receiver but the redshirt freshman from St. Petersburg, Fla., wasn’t fully committed to the idea. During the first week of August, Isaiah Williams went over to Bielema to ask permission to pull Spann out of quarterback drills and work personally with him in 1-on-1 techniques as a receiver.

“I think (Williams) knew I was engaged in practice and he’s standing next to me and he says ‘Can I grab Deuce?’ and I was like ‘Yeah, what do you mean?’ and...I thought he meant because we were short a quarterback (for a drill),” Bielema said. “And no, he meant that he was asking ‘Can I grab Deuce’ to play wide receiver for 1-on-1s right?

At the time, Williams was not active for a few days of practice with an unknown nagging injury that quickly subsided. However, the former wide receiver played the role of recruiting coach knowing Spann would make an excellent addition as Illini receiver room continued to transition in certain personnel.

“So, it was kind of intriguing to me that here’s a guy (in Williams) who had already been down this rodeo once and he can see what Deuce can bring,” Bielema said. “He had a moment there in practice where I hadn’t figured out as a head coach that we needed to come over and get Deuce (to play receiver). Because I had been talking to [Williams] that anything you could tell [Spann] or relay to [Spann] would be great.”

According to Pro Football Focus, Spann played six snaps of offense Saturday in a specially designed package for him as an outside receiver and on his first snap of action in a college football game, he caught a 45-yard deep route from Artur Sitkowski to represent Illinois’ longest pass play of the game.

“Just with his speed through spring ball and through the summer we wanted to find a way to get Deuce on the field right away,” Illinois offensive coordinator Tony Petersen said. “It’s not that much different than what happened with Isaiah really. It just took [Spann] a little longer to find a spot and get in there. ”

Spann, who said he’d never been asked to play anything under than quarterback since he started playing football as a middle school youth athlete, said Saturday that since that first week of August that he and the Illini first-team offense had practiced that specific play call. Spann has already figured out Bielema’s policy on leaking information to the public because he which declined to divulge the name of the play to media after the win.

“Coach Petersen talked to me early in the week and said they were going to have something for me in a play call,” Spann said. “We worked it in practice sometimes but I wasn’t expecting it. I just focused in on executing instead of my emotions when my name was called.”

For his efforts Saturday, Spann was honored as the Big Ten Conference Freshman of the Week following his first college game since signing with Illinois as a three-star prospect who had 6,972 yards of total offense during his high school career.

When Spann ran on the field to ironically replace Williams for that particular play call, practically everybody on the Illinois sideline jumped off the bench, including defensive players, knew what was about to be attempted.

“We saw Deuce in practice and in his first practice at wide receiver, we were all like ‘hold up, this guy is really good’,” Illinois senior cornerback and co-captain Tony Adams said Saturday. “When I saw him running out there for Isaiah at (outside receiver), I was saying to myself ‘here we go, we're going deep’.”

And Bielema was quite confident during last week that the play call would work because Nebraska would never think to expect a player listed at quarterback would be targeted for a deep fly pattern down the sideline.

“I told him either on Wednesday or Thursday that when that first play comes, there’s a very good chance that you’re going to score,” Bielema said. “I called him on Sunday and said I was sorry for being six inches off.”

Spann, who had offers from several Power Five Conference schools including Georgia, Auburn, Florida State, Miami (Fla.), Louisville, Ole Miss, Purdue, Utah, and Virginia Tech to play receiver or defensive back, is now, at least temporarily following in his father’s path as an outside receiver. Spann’s father, Greg Spann Sr. was drafted in the seventh round of the 1996 National Football League Draft out of Jackson State by the Jacksonville Jaguars and would eventually  play professionally in the Arena League and XFL.

Bielema said Monday that he likes the nickname of “Big Play Deuce” for his new receiver but specifically loves the fact that his star receiver has recruiting chops to sell a positional change the Illini staff has wanted for several months.

“So, that was a big ‘a ha’ moment for me as a coach because now I know I have players who think like me,” Bielema said. “When that play was under review, obviously it’s a big play in the game and I want to win the game but at that moment, I was so intensely wired in to how this review was going to come out because I knew it could change the outlook of him. I literally think the best Deuce Spann he can be is at wide receiver.”