The Illini added a much-needed boost to their wide receiving corps this week when Peyton Vining of Denison University announced his transfer to Illinois for the coming football season as a preferred walk-on.

As with so many football players this year, Vining was in an odd situation because Division III Denison played only one official game this season, a match-up with Ohio Wesleyan in which Vining had 6 catches for 90 yards and 2 touchdowns along with 6 kickoff returns for 138 yards.  This is exactly the situation the NCAA was addressing when it permitted an extra year of eligibility for players this year, as many of them lost their entire season because now Vining can take an extra year rather than playing only a single game.

This year's great, albeit brief, run of success is no fluke, because prior to this year Vining was first team all-North Coast Athletic Conference with 35 catches for 936 yards.  He missed his sophomore year and played safety in his freshman year.  Because he sat out that sophomore year, he'll have an argument for another year of eligibility as well.

It clear that this player does not belong at the Division III level.  He is far too physical for Division III corners and also shows a really polished skill set, as you can see in this video:

I don't know that he'll have the athletic ability to separate from Big Ten cornerbacks, but I do feel comfortable that with his sturdy 6'2, 200 pound frame, Vining can be a valuable possession receiver. 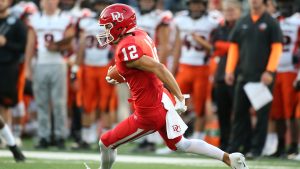 If you've followed Illinois' spring practice news, you may have heard that the wide receiver corps is not only thin, it has not been impressive.  Donny Navarro and Brian Hightower are getting the most reps and they have both produced in the Big Ten.  They are followed by Khmari Thompson and Dalveon Campbell, who look the part but have shown questionable hands.  Desmond Dan, Carlos Sandy, James Frenchie and Kyron Cumby are working behind them, though Cumby is also getting reps at running back.  Jafar Armstrong will likely vault to the top of this list when he arrives on campus and some of the incoming freshmen have promise, but I don't think its a stretch to say that this is a unit that can use more options.

As I mentioned in my previous spotlights on walk-ons, you can't really fit them into my 10 point scale.  There's no real limit on the number of walk-ons the Illini can put on the roster, so there's no downside to taking them.  However, its clear that Vining (and new addition Mike Cerniglia from Northern Illinois, who I referenced in the depth charts article but didn't give his own spotlight) is a cut above the preferred walk-ons that Illinois has added from the high school ranks.  So, even if Vining doesn't possess the athletic ability to get open at the FBS level, Illinois has lost nothing but a bit of practice and preparation time.  If he does produce on the field, then Illinois has another cause to celebrate and sell future walk-ons on the chance to play in Champaign.