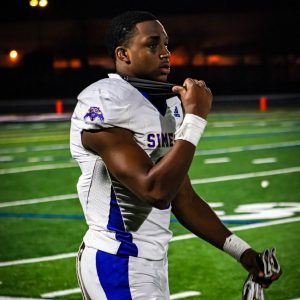 On Thursday, Illinois offered 2023 Chicago Simeon high school wide-out Malik Elzy a scholarship. When the news broke, some were expecting a same-day commitment from the Simeon Wolverine.

It is not just the Illinois coaches; it is a group of players reaching out throughout the state, telling others to join them. Stay home; we are going to make Illinois a powerhouse.

Elzy is a 6-foot-1, 185-pound wide receiver from Chicago with only five offers, but they are big-time: Illinois, Kentucky, Michigan State, Michigan, and Wisconsin with offers from  Michigan State, Wisconsin and Illinois coming this week.  Michigan had offered in January 2020 when Elzy was a freshman.

Offers are rolling in following a great - albeit shortened - season for Elzy and Simeon.  He caught 4 touchdowns for over 500 yards in 3 games.  He also played safety for the Simeon Wolverines, causing 1 forced fumble and recording multiple solo tackles.

"It feels great to be recognized by my home state school. I'm glad they see me as a player who can help them win some games in the future," Elzy said. 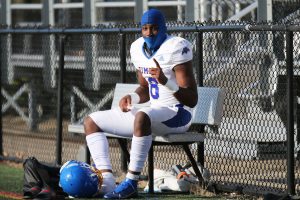 Illinois under the Lovie Smith regime did not offer Elzy who has been thought to be a Michigan lean.  But, the new staff has done its best to convince this athlete to take a hard look at Illinois and join the in-state movement.

Elzy states that he has no hard feelings toward the previous staff; they obviously had a group of players they wanted and he could not fault them for that.

Now the Illinois staff will make every effort to find high-quality players to help them win games and create a culture that makes it okay to stay home and win championships.

"It's noticeable that Illinois is recruiting more big-time players from our state and top 20 caliber talent; recruiting-wise I must say I'm impressed," Elzy said.

Thursday's offer came from assistant coaches George McDonald and Nate McNeal and it did not come as a surprise. Elzy could tell the Illinois interest level had picked up.

It is not certain that Elzy will play receiver, but they have mentioned safety as an option.

Without leaking a favorite, Illinois is attractive to him.

"If I committed to Illinois, my goal would be to win as many championships as possible for my home state school. This is very important to me because I know I can make an impact. By the time I leave Illinois, we will have plenty of championship rings," Elzy said.