Jack Nicklaus is being sued by the Nicklaus Companies

Some NFL owners want to force Washington's Snyder out

IlliniGuys: We've been following your progress all season long. Let's first get back to last weekend and and the Big 10 tournament. Strong showing there and it feels like you you've got some momentum going with this team right now. 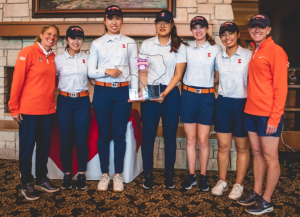 The Illini women's golf team enters NCAA Tournament play just outside the Top 25 rankings and will tee off in the Tallahassee Regional on Monday. (Photo courtesy Illinois Athletics)

Coach Slone: We certainly have experienced some great moments this spring and throughout the season, and we're really excited to build upon those as we head into regionals and the NCAA championship.

IG: For those who don't understand, you don't just play a few tournaments in the spring. I mean, this begins back in August.  Tell people about what college golf is like.

Slone: Yes, absolutely. And thanks for that opportunity. Because a lot of people don't don't realize that college golf is a fall and spring sport. Now obviously, our championship portion of the season is in the spring because of conference tournaments and the NCAA championship. But the tournaments that we play in the fall count just as much as the tournaments in the spring, they count toward our rankings and who is invited to the NCAA postseason. And so we generally will play five tournaments in the fall in September and October. And then our offseason, so to speak is in November and December and then we resume in-season practice in January when the semester starts. And then usually our first tournament will be in early February and we're off and running from there.

IG: It is such a busy grind for all student athletes. I mean, no matter what sport and there's no question even with golf as well. Now I know that a lot of our listeners may be more familiar with college football and college basketball and the process to get an invitation to a bowl or hear your name called on Selection Sunday for basketball's NCAA Tournament. How does that work in in golf?

Slone: During the offseason, we'll assess how our progress went in the fall and where we're at and what we need to do moving forward and put a plan into action during that offseason. But it's throughout the year. There's an NCAA committee that makes the selections here. There are 26 conferences that receive an automatic invite for their conference champion. And then the remaining invites are at-large bids and that's based on the team's performance throughout the year.

IG: What was that like when you did get the call and then shared the good news with the team?

Slone: Well, yes, so we felt confident that we would be advancing. It just was a matter of which regional site that we would be going to. And so when we found out we were going to Tallahassee, very excited about that, and then you know, the preparation begins as far as making travel arrangements and then also determining a practice plan to help us prepare for this particular golf course.

IG: I know Crystal Wang had another fantastic season and was picked as first team All-Big 10 and certainly deserving of that. And I think you had three golfers that received conference mentions, correct? 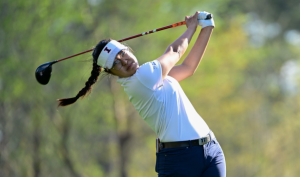 Slone:  Yes, yes. We had two first team Big 10 performers. Crystal and Kornkamol Sukaree, and then Alise Knudson was our Big 10 sportsmanship honoree. But yes, Crystal has had a fantastic season. She was invited to the Augusta National Women's Amateur, which is quite an honor and achievement. And then Crystal was actually in the running for the Big 10 Conference Player of the Year as well. So there were three student athletes that were under consideration for that award.  So very, very excited for her. She's been remarkable - set new school records for both 18-hole score with a final round 64 in Houston. And then during that same tournament, set a new 54-hole scoring mark at 13 under par.  She is a senior, but she will be coming back here (for one more season).

IG: You had a legendary college career as a golfer yourself. How has that experience translated to your success as a coach?

Slone: I think just drawing on those experiences being in similar situations, seeing what is effective and maybe what doesn't work as well. And sharing my knowledge and experiences with our team members. That is very beneficial. I think they appreciate the fact that I have been there, done that, have walked in their shoes and understand. I mean, again, a lot has changed in the past 30 years. But I think you know, there are some things that still remain the same and are core to success at the collegiate level.

IG: Let's get to the tournament now. NCAA Tournament regionals down in Tallahassee, Florida.  How does this field set up for your Illini to do well and to advance?

Slone: Very well. You know, this is a golf course that we are not familiar with, we have not seen it before, none of our team members have seen it before. And a lot of times, that's okay. We'll have an opportunity to get down there on Saturday and do some practicing. And then play our practice round on Sunday, develop a game plan for each individual team member and then then tee it up on Monday. We've played plenty of tournaments in Florida in the past, so we're all familiar with that is going to be warm next week. So we have certainly focused on hydrating this week to get ourselves mentally and physically prepared for that.  There are 12 teams that are competing and the top four will advance to the national championship.

IG: Well, we are rooting for you in Tallahassee AND out in Arizona later on this month! Best of luck to you.

Slone: Thank you very much. I appreciate it.