2022 Big Ten Men's Golf Coach of the Year Mike Small joined the IlliniGuys on the Sports Spectacular radio show in between his team's unprecedented seventh consecutive Big Ten tournament title and ahead of their trip east for the NCAA New Haven Regional, which tees off on Monday.

IlliniGuys: Welcome back to the Sports Spectacular. Has the big win in the conference tournament sunk in yet?

Mike Small:  Yeah, it's sunken in. And the guys have enjoyed it. But you know, the attention is great. They feel proud of what they did. It's not easy. But those are the expectations every year that the guys have in front of them. But they're feeling good and now we're getting ready for regionals.

IG:  Coach, what isn't talked about is the expectations that there's a little extra pressure every year to not be the team that lets that streak end.

MS: Well, that's right. Former players send little notes once in a while or see the guys out the street, so it's not visual to the public. But in-house, there's a little bit of pressure there. And that's good. We won five in a row back in the day before we lost in 2014 and finished second. So I've kind of learned, we talk about it and we make it something that's a goal and we don't run from it. And maybe that's helped, you know, the last two Big Ten championships, we won by one stroke and you can't get any closer than that. We had a bunch of those wins where we were winning by double digits. So those weren't in question as much. But I think as a coach, when you just talk about it and embrace the challenge of it, maybe the pressure does go away a little bit. 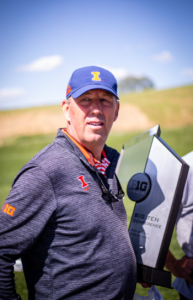 IG:  Some teams from down south have a weather advantage. How do you get such a high performing team when weather can be such a crazy component to practicing and working on skills throughout a lot of the year?

MS: Well, thanks for that. And that's something that we're proud of in our national record. We've made 13 straight national finals, which is the second longest streak in the country. But the thing we understand is that all the Big Ten teams are under the same climate restrictions as we are. So that's kind of how you gauge yourself. But nationally, if you look at the history of the sport, the majority of good and great teams come from the warm weather but the Big Ten's had its good share of good individuals over the years and good teams. But for us to compete consistently as we have for the last you know, 13 to 15 years nationally is something that I'm very proud of the kids and it gets back to what I said a minute ago.  We embrace it. We don't use it excuses, we use it to an advantage. We schedule, we plan, we try to go about our business, using the winter to get better and then to sprinkle in events early. And then at this time of year when the Big Ten and the postseason and nationals come around. We're peaking and we've hit a certain standard that we've kind of built for all year.

IG: Take us back to the final round of the Big Ten tournament over in Indiana. You guys were down several strokes but rallied late to remain conference champions. Take us through the day and the ups and downs and the emotions of the afternoon.

MS: Well, we were down by one shot going into the last round and it was nip and tuck all day but I told the guys I thought one of the keys was to us winning was the way we closed out round two, where we had two birdies in the last hole and instead of being down three, we're only down one. And also Michigan State's last player bogeyed the last hole, so there was a three shot swing in the last two groups. So being down four versus being down one going into the last round is a big deal in golf. I mean, even though you're taking 800 and some shots for three days, the value of one shot always seems to show itself. And when you go into the last round one down instead of four, that's a big deal. So I thought it started there. And then in the last round, we started off okay, but then we fell back a couple shots, but it was never out of reach. We generally close pretty strong and that happened again this year. I think we picked up three or four shots on Michigan State in the last two or three holes and that's something that obviously put us over the edge. But the conditions were so tough, the wind was blowing so hard and so consistent. That course in French Lick is really very treacherous normally, add in the wind and it's double treacherous; the fairways run off and the greens run off into collection areas and with the flags blowing sideways, the greens are firm and fast. It was a survival day. That's why if you look at the score from one to like seven in the event, we're all bunched up. There was no separation because players weren't making birdies, you're just trying to hang on with pars. And when that happens, there's not a lot of separation. So we just kind of outlasted everybody. In those conditions, we're fortunate to hold on by one shot.

MS: Sure, I think different courses fit different players. But in team golf, if you have enough different players, then you're never really out of a course if that makes sense. We have some players that have different strengths in the game, which in recruiting you always try to recruit the best players you can. But at the same time, if you can recruit different players that have different strengths then that kind of safeguards you against some courses that may or may not fit people's eyes. But we talk a lot and we pride ourselves on a competitive mindset where there's no regrets, no second chance, no worries or thinking about things and excuses. So we'll go anywhere and play anybody at anytime and that's kind of what we always talk about.

IG: You just won a record 12th Big Ten Coach of the Year Award.  Congratulations on that! What do you use to push yourself and your team to achieve at such a high level?

MS: I think we're competitive people. I think anything we do, we want to do well, I try to recruit kids like that, that have pride. In college athletics, though you have a new team every year and new kids every year, we're always motivated by the young freshmen that come in want to get a ring because you never know if you're gonna get another one. So there's more impetus and more focus on that, but we just try to stay in the present. And I learned a long time ago that if you stay in the present, keep your nose to the grindstone, do the best you can every day, the future will take care of itself. If you get too far into the future and you start counting those trophies or those rings all the time, you kind of get a little soft, and then your minds in the past and then you're worried about the future. And if you just do things the right way and control your space like we talked about, which is your mind and your emotions and what you can control. In the end, the chances of accumulating those awards or those victories or those championships will add up. But it's something that we're very proud of.

IG: Let's get to the NCAA Tournament. You're going to play in the New Haven regional. Tell us how the field shapes up for you guys.

MS: Well, when you get the NCAA and the postseason, all the fields are strong. You got 14 teams trying to qualify for five spots to go out to Scottsdale for the national finals. We're playing at Yale, which is an historic old golf course that's kind of got an old school flavor to it and that's something that we're gonna have to deal with. But we played well there before. I think the course sets up well, for us. I think the field is obviously deep and top heavy with three ACC teams and it's got three strong mid major southeastern part of the country teams that are really good. And so like any other year, we're gonna have to show up and play hard and stay in the moment and compete and try to win the dang thing and not just try to qualify and then we'll be okay.

IG: Coach, best of luck here in the coming weeks. Thanks as always for spending time with us and we've already got it on our calendars. It's New Haven first, and then Scottsdale for the NCAA championship. So we're just we're just going to speak it into truth right here.  Already penciled it in.