by Brad Sturdy for IlliniGuys.com

The Illini added Florida transfer big man Omar Payne on Saturday as a replacement for Giorgi Bezhanishvili and possibly Kofi Cockburn depending upon what he does. Everyone will say that Payne brings some athleticism, rebounding and toughness, but what do the numbers say about this addition? Let’s look closer.

The 3.8 Points and 3.2 rebounds per contest in just over 15 minutes do not scream impact player, but as we look closer we see a much better offensive player. Payne had a 128.2 Offensive Rating, although that was with a low usage rate, in large part due to his 75% shooting from the floor. That’s to be expected when you take 89% of your shots at the rim. This is a player that understood his role and filled it. He did shoot a respectable 40% on 2 point jumpers as well. That may seem low, but he was higher than Kofi Cockburn, Ayo Dosunmu and Luka Garza in that area, so that’s solid.

Another area where he is good is on the offensive glass, where he grabbed 14.8% of misses as a Freshman and 9.7% as a Sophomore. Those are solid numbers, which would place him in the top 10 in the Big Ten conference, and rebounding is a skill that usually translates. 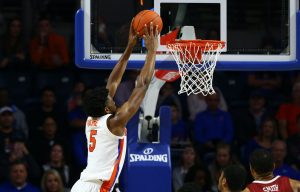 Payne was ranked in the 97th percentile on Synergy Sports, with a 1.154 PPP rating. Two areas where he excelled were off of a cut, where he was at 1.389 PPP and as the roll man in pick and roll situations. He was the #1 high major player as a roll man finisher, scoring 1.714 PPP, which is dynamic. Kofi was at just under 1.5, for reference. Playing with Andre Curbelo should only help that number, which saw him shoot 83% from the floor on pick and rolls.

One area where he struggled offensively was when he would get offensive rebounds, he didn’t always make good decisions with the ball. When he did shoot, he finished though, hitting 79% on shots around the basket. He even scored 1 PPP on post ups, which is a very solid number putting him in the 84th percentile nationally.

Payne would provide an immediate upgrade defensively with his athleticism, mobility and shot blocking ability. Payne blocked 8.6% of shots while he was on the floor, which would have ranked 3rd in the Big Ten, behind Liam Robbins and Myles Johnson. That’s something Illinois hasn’t had in a long time.

Payne had a defensive rating of 98.2, which is solid. His Synergy numbers show even more detail. Payne is an extremely good defender of jump shots, holding opponents to 24.3% shooting on jumpers. He can defend multiple positions as well, which allows him to switch and guard smaller players, who shot just 5 for 31 with Payne as the primary defender from behind the 3 point line.

If there is an area of concern, it is his rebounding and his propensity to foul. He fouled just over 6 times per 40 minutes and only grabbed at a 13.7% defensive rebounding rate. That’s an area where he will need to improve upon, which is somewhat due to his willingness to attempt to block shots around the rim.

Payne provides some needed depth and experience to the Illini frontcourt and is an ideal player for 15-20 minutes per game at this point. If Orlando Antigua can work his magic, he could be even more.