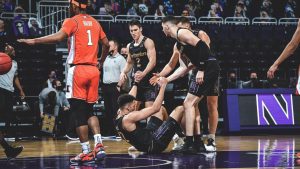 The Illini played a horrific first half. They allowed Northwestern to score 43 points. They were outrebounded - even if only by 2 - a scenario that no one anticipated happening. The Illini were 0-4 on lob passes into Kofi. The team looked as mystified by the Northwestern 3-2 zone as Tom Crean’s #1 seeded Indiana team looked mystified in the 2013 NCAA basketball tournament by the Syracuse 2-3 zone that trounced the Hoosiers.

Amazingly, Adam Miller’s 3 pointer with 8:39 left in the first half had the Illini down by only a single point at 23-22. The rest of the half, the Illini were outscored 20-5 as Ayo sat the bench with 2 fouls and Da’Monte Williams appeared to twist an ankle awkwardly. The Illini’s 11 turnovers and multiple lineups that didn’t seem to click indicated that both the coaching staff and players were struggling as the Wildcats built up a big lead.

And in true Dr. Jekyll and Mr. Hyde fashion, the Illini got angry and transformed from skinny Bruce Banner to the Incredible Hulk in the second half - outscoring a hapless Northwestern squad 53-13. This was the definition of a role reversal as the Illini who held the Wildcats to 2-25 from the field in the second half - allowing one two point basket and one three pointer to go along with 8 free throws. The Illini outrebounded the Wildcats 27-13. The Illini limited themselves to only 4 turnovers in the second half to literally strangle the Cats into submission. Illini coaching adjustments on how to attack the zone clearly made a big difference.

The Illini displayed a balanced scoring attack featuring 18 from Kofi, 15 from Ayo, with both Miller and Frazier at 14 points. Williams battled injuries throughout the game but still hit a couple of threes and Curbelo added 7 assists. If the Illini play like that for two consecutive halves, even Gonzaga and Baylor will need to watch out - but the Illini need to start playing two strong back-to-back halves. There’s no need for any more games with such a disparity in intensity from the team.

In typical Kofi fashion, the big man was unstoppable in the lane in the second half. Shooting a modest 8-9, Kofi’s only problem was the occasional mishandling of the ball in the first half. His 12 rebounds gave him his 8th double double of the season. Kofi had a modest 5 points and 2 rebounds in the first half. In the second half, he controlled the pace of the game with his rebounding and his ten points helped open passing lanes for the Illini guards in the second half as well. It’s hard to describe what a force he is inside the paint. He forces defenses to honor his presence inside and his power dunks energize the team as he throws them down - fueling Illini emotions for the next defensive possession. The dual benefits of his great play is hard to overestimate.

Ayo had a similar Banner to Hulk transformation in the second half. Coming off of a foul-shortened first half, where he only scored 4 points with 2 rebounds and an assist, Ayo elevated his play and intensity in the second half. He ended up with 10 points 3 rebounds and 5 assists in the second half. He also made one play the clearly demonstrated his will to win. After a bad pass came his way, Ayo went to the floor and secured a jump ball. It might’ve seemed like no big deal, but that possession ended up in a made three pointer and the Illini avoided one of their “dead” stretches where possessions don’t end in points. That play by Ayo is exactly why NBA teams will want a player like him on their roster come Draft Day. Many players would've walked away from the bad pass with an angry look at their teammate. Ayo hit the deck and got the possession back for the Illini. That's what winners do. That's how leaders lead from the front.

They weren’t perfect, but the threes this trio rained down on the Wildcats made a difference. Collectively, they shot 9-23 from the three point line. The Wildcats were forced to choose to either let the Illini shoot from the perimeter or figure out a way to deal with Kofi on the inside. Due to the play of the team in the second half, the Wildcats appeared to choose “none of the above” and the rout was on. It was nice to see Williams continue his hot shooting. Who else could we say that 50% was just an “okay” night? For this team to compete for a national title, the Illini will need nights where Trent and Miller are hitting. This is the type of game that helps build that confidence. Underwood will continue building their confidence on Sunday against Maryland at the State Farm Center.

The up and down Maryland Terrapins are coming to play the Fighting Illini in Champaign-Urbana. Maryland is in the midst of a brutal stretch of their B1G conference schedule. The Terrapins have lost three in a row, but the three teams hanging the losses on Maryland are Michigan, Indiana, and Iowa. And before that, the Terrapins beat the Wisconsin Badgers. The Illini will be tempted to just write a “W” in column, but they have to avoid that assumption and play with 40 minutes of intensity.