CHAMPAIGN, Ill. -- In both a literal and figurative way, Illinois’ 2022 recruiting class just got a lot bigger on Friday night.

Matt Fries, a three-star offensive tackle from Cranford, New Jersey, announced his verbal pledge to the first full recruiting class of new Illinois head coach Bret Bielema and became the fourth offensive lineman to commit to the Illini in this class. 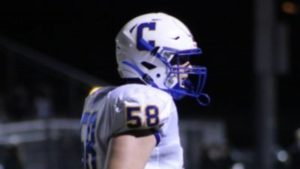 Fries is hoping to replicate the success of his older brother Will, who was a four-year offensive line starter at Penn State and was selected in the seventh round of the 2021 NFL Draft by the Indianapolis Colts.

Will Fries showed his versatility on the offensive line for Nittany Lions head coach James Franklin by executing 26 career starts at right tackle, nine at left tackle, six at right guard and one at left guard. Matt Fries’ natural instincts in pulling from the left tackle position at Cranford (N.J.) High School could immediately translate at right tackle at the collegiate level as Bielema attempts to transition the offensive line play into his traditional power running game.

Matt Fries gave his verbal pledge to Illinois less than a week after coming back from the Champaign campus for his final official visit. Matt Fries, who becomes the third prospect from New Jersey to pledge his services to the Illini’s 2022 recruiting class, took official visits at Arizona State and Indiana last month but chose Illinois over scholarship offers from several Power Five Conference schools including West Virginia, Arizona, Syracuse and Wake Forest.

Bielema, who spent last year as the outside linebackers coach with the NFL’s New York Giants, has attempted to established the areas near New Jersey and Pennsylvania as recruiting territories for the Illini as Fries will join three-star quarterback Donovan Leary and three-star tight end Owen Anderson as 2022 commits from the Garden State.

Illinois’ 12 verbal commitments now puts them ahead of all but two programs in the Western Division of the Big Ten Conference (Purdue and Minnesota each have 13) and the Fries commitment puts the Illini ranked in the Top 50 nationally of all the online recruiting services.

Illinois currently has 16 scholarship offensive lineman on the upcoming 2021 roster but five of those players are either super seniors returning for their last year or incoming transfers with only one year of eligibility remaining. With Fries’ commitment, Illinois is slated to now have eight scholarship offensive lineman coming to Champaign in the last two recruiting classes.