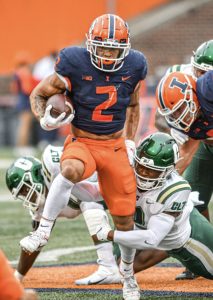 Charlotte arrived at Memorial Stadium as a serious threat to steal a victory from the Illini. They left Memorial Stadium as a losing team held scoreless in the second half. The 49ers only gained 7 yards in the fourth quarter. The Illini avoided the missed assignments, penalties and controversial coaching decisions that made the last two games rollercoaster rides that pitched a few fans off the track during a couple of high speed inversions.

Today was a study in Bielema Ball. We have all seen this movie before when Bielema led his Wisconsin Badgers. The Illini ran the ball down the throats of the visitors even as they were aware of what was coming. The 49ers just couldn't stop the run when they had to do so. It may not be as aesthetically pleasing to some pass-happy Illini fans, but the running battering ram was effective. What remains to be seen is how this movie will play when the audience is made up of B1G teams.

The teeth gnashing over the three close losses earlier in the season will grow louder. This is caused by three B1G teams looking to be weaker now than when fans analyzed the schedule before the season. With Minnesota (3-2), Wisconsin (1-3) and Northwestern (2-3) all struggling - many Illini fans look at a possibility of the Illini finishing at a frustrating 5 wins - missing out on an unexpected bowl bid in year one of the Bielema Era due to any 1 of the 3 frustrating losses.

Like many years, its hard to know what any team's schedule really means until the teams show what they are capable of doing on any given Saturday. Some of the B1G teams have proven to be softer than experts and fans expected. At the same time, we've seen that the start of the schedule has a group of teams that have proven better than expected as well. UTSA is 5-0, Maryland is 4-1, Virginia, Purdue, and Charlotte are all 3-2, and Nebraska brings up the rear at 3-3.

Depending upon the narrative one wants to construct, the Illini have fumbled the season miserably by losing 3 games that the Illini should have won. Or, one could say that the Illini have improved and have lost 4 games to six teams that are 21-10 so far this year - and the individual game results have been improving as the season moves forward. The next few games will provide a test for Bielema and his team. Will they continue to improve as they play the heart of their B1G schedule? 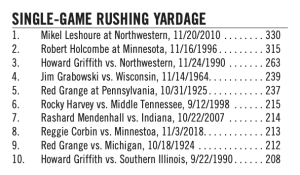 The Illini are healthy again. Chase Brown contributed mightily to the Illini victory with 257 yards rushing including a highlight reel 80 yard touchdown run. Keith Randolph, Jr. displayed the soft hands of a basketball player as he snagged a Chris Reynolds pass and turned it into an exciting interception. Brandon Peters was back and while he struggled with in the passing game, he avoided any turnovers. Bielema Ball doesn't work with turnovers.

Brown's day was one for the history books. He moved into fourth place on the Illini's all-time single game rushing record book. With one less penalty, Brown would've passed Howard Griffith in third place. He still managed to nearly double his career high of 131 yards versus Rutgers in 2019. He proved to many today that he is now healthy and he was making runs that no other running back could make. On a team bursting with talented running backs, it's a big deal to be the best and Brown placed his claim on that ranking today.

Hail Mary #3 - Next Up Wisconsin

In 1910, the University of Illinois celebrated it's first homecoming football game. Next week, the Illini will host the Wisconsin Badgers for Homecoming 2021.

This game will constitute the first time Bret Bielema will face his old Wisconsin team while on the opposite sideline leading another B1G team. This game will also represent the first chance for Coach Bielema to win his 100th game as a head coach. The stars have aligned for a week of interesting storylines.

Stay tuned. The season has a chance to get very interesting, but the Illini have to beat the Badgers to keep stirring the pot of intrigue.