Mike Cagley's Heat Checks and Hail Marys - Virginia Crushes Illinois 42-14 or How Long Does it Take to Turnaround a Program?

It doesn't often happen that a game with a final score of 42-14 wasn't as nearly as "close" as the score indicated. Today's game was not as "close" as the lopsided score - which is not a good thing for the psyche of Illini fans.

Today's game demonstrated the hurdles that are in front of Bielema and his staff. The current Illini talent level is lower than imagined due to the lack of recruiting success during the Lovie Smith era. Bielema is faced with teaching football, coaching football, and trying to counsel players in how to win after four years of not winning. It's a big task. Bigger than most Illini fans wanted to admit, but the Virginia game may have taken those illusions of a quick reversal of fortune and shattered them like a mirror shattering for seven years of bad luck.

Heat Check #1 - Bronco Mendenhall - Taking over at Virginia in 2016 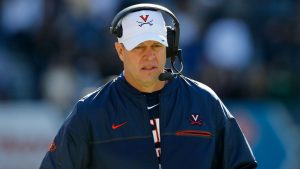 Today, it was clearly Bronco Mendenhall and this Cavalier team that had the upper hand in both schemes and talent. Mendenhall arrived in Virginia with a sterling coaching reputation.  In 11 seasons as a head coach at BYU, he didn't have a losing season, only one season where his team was .500 - and that was in his first year at BYU. Mendenhall had a winning record every year and even had double digit win totals in 5 of his 11 seasons.

Before one assumes the rebuild at Virginia hasn't experienced any bumps, Mendenhall's Cavaliers went 2-10 his first year, 6-7 (lost in bowl), 8-5 (won in bowl), 9-5 (losing in ACC title game and a bowl) and then dropped back to 5-5 last year. Most are willing to give teams a pass for last year's results, but Mendenhall is clearly gunning for an ACC Coastal Championship this season.

Mendenhall is an excellent coach and yet 2 games into his 6th year at Virginia, he's 32-32. Mendenhall took over a program that was year-in and year-out a better program than the Illini. Under George Welsh, the Cavaliers had a .608 winning percentage from 82 - 00. This is better win percentage than the 80s that "belonged" to the Illini. The Groh and London years leading up to Mendenhall's tenure still ended up at a .464 winning percentage. Virginia has a program that has overachieved - at least when compared to the Illini. Virginia now has a coach that in the 2nd game of the 6th year of his rebuild has clearly demolished Coach Bielema in game 3 of year 1 of his rebuild.

This example is to illustrate that its not as simple to turn around a football program in a P5 program as many would like to imagine. Certainly, it's not impossible, but the time needed to develop a plan, implement the plan, and fully execute the plan takes at least three recruiting classes to implement. 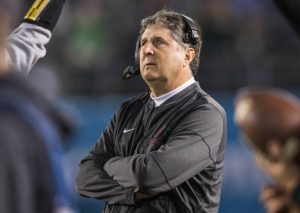 Mike Leach took over at Texas Tech in 2000 and coached there through 2009. He never had a losing season and even won 11 games in a season. His Air Raid offense set records and he proved that he could recruit talent to play at a school that was considered a "second tier" school in the Big 12 and win. Leach had an offense that was impossible to stop and he understood exactly what players were needed to run the offense well. In many ways, Leach reminded one of the accomplishments of Mike White as he built up the Illini into a contender in the 80s.

However, if one digs deeper, Mike Leach followed Spike Dykes who coached at Texas Tech from 1986 to 1999. Dykes ended up with a 82-67-1 record - including a 28-20 record after the team joined the Big 12 after the Southwest Conference folded in 1995. Dykes retired as the school's coaching win leader, which was surpassed by Mike Leach.

In this case, while Leach did fabulously at Texas Tech, it wouldn't qualify as a reclamation project like the one that Bret Bielema faces. Comparisons to Mike Leach's turnaround of a program would be more accurate when looking at his performance as the Washington State head coach. At Washington State, Leach went 3-9, 6-7 (losing a bowl) and 2-7 in his first three years.

In year four, he turned the program around by going 9-4, 8-5, 9-4, and 11-2 before finishing his tenure with a 6-7 season in 2019 and losing in the Cheez-It Bowl. This situation would be more analogous to the Illini's situation. It had been 9 years since the Cougars had produced a winning season and the team had managed to lose 10 or more games in three of the four seasons directly before Leach's arrival. It took Leach four years to turn that mess around - and that is not being judgmental. It was hard work for Leach to turn Washington State around - and aside from a three year stretch from 2001-03 - the program had never done as well as it did during Leach's tenure. 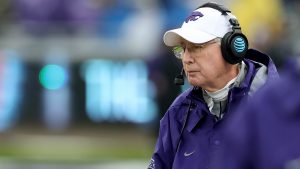 While it is a dated example, Bill Snyder has accomplished not one, but two major turnarounds at Kansas State. He took over a true dumpster fire in 1989. Snyder went 1-10, 5-6, 7-4, 5-6, and 9-2-1 in his first five years. This 9 win season proved to lead to 8 straight years of winning 9 or more games including 5 years of double digit victories.

To give one an idea of how bad the Kansas State football program was, Snyder was the first coach with a winning record since a Pappy Waldorf went 7-2-1 in 1934. That's really bad. In this case the term a "true dumpster fire" may be a gross understatement.

Snyder retired in 2005 and then returned in 2009 after three seasons of Ron Prince going 3 games under .500. Snyder promptly went at least 6-6 every regular season until his final year in 2018. He retired with a 215-117-1 record for what was once one of the worst programs in P5 (if not the very worst). Snyder is the gold standard.

Snyder is the turnaround master and even in his early days, he suffered a 1-10 record in his initial year as a head coach at Kansas State. Admittedly, that was a long time ago, but Snyder proves that the first year of a new coach's tenure isn't necessarily the best time to measure whether a coach will be successful or not. Year three or four is a more accurate barometer for one to make sure the coach is on the right path.

The big challenge for Coach Bielema is the mood of the Illini fandom. Over the course of the last 50 years, the Illini fans are simply tired of waiting for the new coach to win - and then watching as he fails to do so. Bret Bielema had nothing to do with that, but he will have to deal with these feelings. There's a reason he gets paid over $4 million a year to coach the Illini. Maybe it's in part because he knew how hard this was going to be. One should be paid well to do a hard job. Coach Bielema has a hard job.