Fighting Illini Football Success – The 80s were the only Outlier

The Illini football program has been bad for most of my life (born in 1967). The only time they were really tough was the 80s and early 90s. Obviously, the 80s were a beautiful time to be an Illini fan. The Illini football program had its best decade of my lifetime. Mike White led an exciting team led by star quarterbacks Dave Wilson, Tony Eason, and Jack Trudeau. These quarterbacks, supported by high talent players like David Williams and Craig Swoope made the early and mid 80s fun. John Mackovic and Jeff George led the Illini team that closed out a wonderful decade to be an Illini fan. Those days seem to be a past that seemingly cannot be replicated.

Let’s look at the Illini’s football program’s history during my memory. It’s not good. Thankfully, no one showed this to Coach Bielema prior to his hiring.

The problem with Illini football, while long lasting, is very easy to diagnose. During the 80s, the Illini had Mike White and John Mackovic. Both men were respected coaches before they arrived in Champaign-Urbana and they had solid careers after they moved on. And that is the end of the list of good Illini head football coaches.

Let’s contrast those two coaches with the men hired after them: Lou Tepper, Ron Turner, Ron Zook, Tim Beckman, Bill Cubit. None of these men have been a head coach at a P5 school since leaving Illinois. Lovie Smith still has time to create a resume, so I'll leave him alone - though I doubt he'll ever coach in the collegiate ranks again. Even more telling, he may never be a head coach again - either at the collegiate or at the NFL level.

Based on the coaches hired over the last 25 years, either Illinois destroys head football coaching careers or Illinois hires folks who just aren’t good enough to be head coaches in the B1G. I vote for the latter. And if one is not a very good coach entering this job, running the Illini program and battling in the strong as steel B1G is so challenging, it means a prospective coach is at risk of capsizing his future career prospects.

The Illini haven’t effectively hired a good coach since the 80s. Former AD Ron Guenther was abysmal at developing a football program. That has continued through the 201os. Josh Whitman's first hire, Lovie Smith, came with expectations that he would significantly elevate the talent level of the team, but he did not recruit well enough to have the depth necessary to win bigger than a 6-6 season. Sadly, that year was a "one off" instead of the rule. Expectations for a respected NFL head coach to successfully attract difference makers to the Fighting Illini have proven to be unrealistic. While the hiring of Lovie was an inspired choice, Lovie did not do enough to turn around the program in the time he was the Illini head coach. 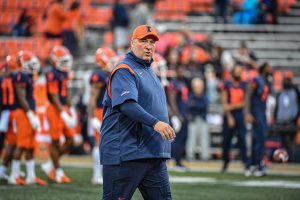 It's 2021 and Bret Bielema is here. A new and stronger staff is in place. The players largely remain the same with a huge cast of super seniors returning to try to write a final - and more successful - chapter to their Illini careers. The fact remains that these super seniors and their teammates have yet to learn how to win at the collegiate level. The coaching staff must teach "Football 101" with a renewed vigor. They may also have to go to the very front of the book and start with the forward. These players need to learn the most basic lessons as the staff lays a foundation for not just this season's team, but for teams to follow in the future.

Unfortunately for Illini fans, the most dangerous time is when we have hope. With a coaching change to a head coach possessing a successful B1G resume, many fans are hopeful. But, like so many times in the past, this is when fate twists and steals hope away from the Illini fandom. My suspicion is the coaching staff and players won't let a rough game or two rob them of their hope or divert their attention away from working hard to get better, but losing the support of a very fragile Illini fandom is a risk.

Ticket sales is going to be an ongoing challenge. Looking at the last few decades, it's easy to see why Illini fans are hesitant to support a program that has let them down so consistently. At the same time, one hopes the coaching staff and players of today aren't going to have to pay for the sins of past failures that they had little or nothing to do with. If Coach Bielema can improve the talent level of players rostered and if his coaches can maximize the results of the players rostered, maybe Illini fans can steal a slogan from the 80s and say “The 20s Belong to the Illini”. Fans have to realize that rebuilding a roster takes time and discipline. Will they have the patience to wait? Will the staff be able to improve the team enough to demonstrate to fans that this is a journey worth taking together?

A large segment of Illini fans are sold that this year's football team is simply a "repeat episode" of the team that played last season. That seems a bit unfair this early into the season. It's too soon to judge the success or failure of the new Bielema era. The roster has to be reworked - but until that happens - fans are looking for some of the behaviors on the field to change. Fans want to see fewer moments of a ball hitting an Illini player in the backside only to be recovered by an opposing player, fewer plays with quarterbacks not recognizing wide open receivers, and fewer drives where an opposing team throws the same pattern to the same player multiple times - with success.

It's too soon to pass judgment on the new Illini football coaching staff. Thankfully, it appears that many of the issues that cost the Illini the game against UT San Antonio are correctable and coachable. The staff and players will need to fix those issues before running up against Virginia. It doesn't get easier, but for the first time in a long time, it seems like the Illini have a head coach that not only has a plan - but he has a shot at executing it.

Conversely, the coaches and players must understand that Illini fans are hesitant to go "all in" because they fear the Illini getting stuck in yet another decade where the football program is mired around the .400 winning percentage.

Illini fans also have to look at the last 50 years and at least be willing to acknowledge that the program has to crawl before it can walk and walk before it can run. Coach Bielema has taken on the Illini at a point that is comparable to the depths of despair that greeted Mike White. The team has been underperforming for decades - not years. Let's give the team and the new staff more than two or three games to turn things around. Patience may not be a virtue but it is needed.

There's a mountain in front of Bielema. I'm pretty certain that he is aware that the only way to move it is one shovelful of dirt at a time. Will the fans let him get to work?