Today is a rare Heat Check and Hail Mary Double Feature. We have two wins - one was unbelievably exciting as the Fighting Illini toppled heavily favored #7 Penn State on the road and the other was unbelievably exciting as we got to see the Fighting Illini Men's Basketball team play their first game in front of a crowd at the State Farm Center in 594 days. The last time we had a crowd watching the basketball team was March 8, 2020 against the Iowa Hawkeyes. 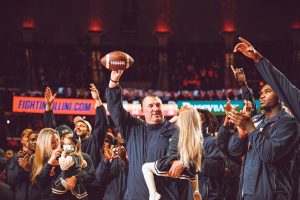 Bret Bielema won his 100th career game as a head coach. That alone is a great accomplishment and worthy of respect. What made it doubly sweet (and on Saturday, doubles were clearly running wild) was that the 100th win came on the road against the #7 rated Penn State Nittany Lions. While this season has had it's ups and downs, this game is clearly a very high up.

The 9 Overtime game set a new record for FBS football. This is the type of game that when combined with an upset over a 7th ranked team will get the Illini on sportscasts across the country. Coach Bielema now has something to sell recruits that is tangible - a signature win over a Top 10 team, a high profile conference rival, and a win on the road.

Hail Mary #1 - A Signature Win in Year One

This signature win gives the staff a great recruiting tool to use while out on the recruiting trail. Selling a signature win over a Top 10 team, a high profile conference rival, and a win on the road provide a lever to create interest in both high school recruits and transfer portal recruits. What is even better about this win is what it demonstrates for the long run potential of the Illini football program under Bret Bielema.

Currently, the Illini coaching staff is dealing with a roster that has a myriad of talent deficiencies largely due to the recruiting limitations of the Lovie Smith staff. Being able to get this type of effort - coupled with delivering such impressive results - makes one wonder what is possible for the Illini if Coach Bielema is able to recruit the massive offensive lines that he was famous for putting on the field at Wisconsin. Not to mention if Bielema and his staff can land a quarterback anywhere near the talent level of Russell Wilson (or just your typical average collegiate quarterback).

It won't be hard to sell potential recruits on the possibilities of what can be accomplished by a "fully powered" Bielema team. If a team "without a quarterback" can defeat the #7 team on the road, its not hard to sell prospects on the very real probability of success being in the immediate future for the Illini football program.

Hail Mary #2 - Is a Bowl Game a Possibility 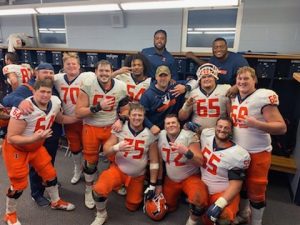 It won't be easy, it isn't guaranteed, but it could happen. The Illini need to win 3 of their last 4 games. Rutgers and Northwestern are home games while Minnesota and Iowa are road games. Penn State proved that all four games are winnable. Beating the #7 team in the country on the road is a great confidence builder. The staff has been working to coach the team to win and their goal was accomplished.

The Penn State game closed in a high stakes, pressure cooker environment. The Illini didn't make mistakes down the stretch. They stood toe-to-toe with the heavily favored Nittany Lions. This iteration of the Fighting Illini football team executed down the stretch to win. They finally executed when the chips were down. The next time they're in a high pressure game (which could be as soon as next week), they will have the confidence born of accomplishment.

Certainly the controversial comments of Coach Bielema, which were only controversial if they were taken out of context, seemed to energize the offensive line's play today. Both lines dominated their counterparts - and their adversaries were almost to a man higher ranked recruits in high school. Rankings didn't matter today. If the Illini lines play like this the rest of the way, they will have a strong chance to make a bowl game.

If this team actually believes in themselves, they may be able to overcome their limitations - and here's to hoping for improved quarterback play.

Clearly this year is a down year for college football. To illustrate this point, Penn State was beaten at home by an Illini squad coming off of a demoralizing homecoming shutout at the hands of a Wisconsin team that is a shadow of the Wisconsin teams of the past (at least offensively). With Penn State facing five more games and three of them being at #5 Ohio State, versus #6 Michigan at home, and at #9 Michigan State; Penn State may not ever get close to the #7 ranking they had earned prior to being beaten by the Fighting Illini.

We will find out over the last five weeks of the season if the Nittany Lions were legitimate contenders for the B1G title or if they were just paper pretenders who started the year over ranked by pollsters. They had their chances to win this game but didn't come through when they had to perform. Despite the Illini beating them today, the rest of the season is in their hands, but their task is a daunting one.

It was enjoyable to see the Illini playing in front of a crowd again. Despite the weak competition (it was an exhibition after all) the State Farm Center looked to be about 70% full. The crowd enjoyed the game and everyone contributed. There were plenty of 3's, we saw a few dunks, and we saw Curbelo try to thread the needle on some challenging passes. Heck, the refs even rewarded defenders with charges getting called.  All in all, it was a good night. It's hard to complain about a 101-34 victory.

If you add in the appearance of the victorious football team in the first half, it made the whole day come together nicely. Foreshadowing is a technique used most by fictional writers. Maybe, we saw a hint of what may come in the future. We could be going forward to a future that resembles the past. Many of us remember the 80s vividly. In that decade, both teams would regularly be ranked. It would be excellent to return to those days.

It's too early to tell on the football side, but the win on the road at Penn State indicates the possibility exists. As for basketball, under Brad Underwood, the Illini seemed to not only be nationally relevant again, but they seem to be a program on the rise to challenge the status quo at the very top. Hope springs eternal on a day like Saturday. 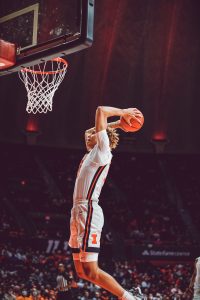 The team was led in scoring by Kofi Cockburn and Austin Hutcherson with 14 points each, Coleman Hawkins had 13, Andre Curbelo had 11, Trent Frazier had 10 and RJ Melendez had 9. Rebounding was led by Hutcherson with 7, Cockburn and Brandon Lieb with 6, and Coleman Hawkins with 5. Curbelo also had 5 assists - and 5 turnovers. Surprisingly, the duo of Hutcherson and Hawkins led the way from beyond the 3-point arc with both going 2-3 from the three. Trent Frazier had 6 steals in 19 minutes of play and it almost seemed as though there were 2 or 3 of him on defense. He is at mid-season form already on that end of the court.

The defense was about as good as you'll see in such an exhibition. The Illini held St. Francis (IL) to 24.5% shooting for the game and forced 26 turnovers. This compared to the Illini shooting 58.2% from the field (34.8% from the 3) and grabbing 50 rebounds of the their own, including 13 offensive boards.

Heat Check #2 - Curbelo is the Bomb

Andre Curbelo is making this team his. He was in fine form with a few stellar assists. He also had a few careless turnovers. Trying to thread the needle against a team like St. Francis (IL) isn't a bad thing, but some of the those passes will need to come out of this bag of tricks by B1G season. That's not a big deal as he minimized crazy pass turnovers late last season, but Coach Underwood probably feels like he might need to start pulling some coaching levers to help minimize mistakes earlier rather than later.

My Curbelo highlight was the moment that he snuck back out on to the court behind the referee's back to help up a St. Francis (IL) player who had been knocked down. Then, Gatorade towel over his head, he snuck back to the bench to avoid any type of violation for leaving the bench. Curbelo has great quickness and he used it here too.

Austin Hutcherson did a lot of things very well tonight. In 19 minutes of playing time, he scored 14 points, had 7 rebounds, 1 assist and 2 steals. After dealing with a back injury last year and having to sit out the season prior to that due to the old transfer rules, we have an older and more mature "newbie" in an Illini uniform. He still is showing a bit of rust, because he's not been able to play in games for 2 full seasons. He looked good this evening and if he can round into full form as the non-conference season builds, he will be a difference maker in the back half of the year.

Hutcherson did have one "wow" moment where he went up in the air for the ball and it looked like his head was up at rim level. At 6'6" and a very wide wingspan, he's the type of defender who is hard to get around - or over. There is a lot to be hopeful about when you look at Hutcherson and the potential that he represents to a team that could use his contributions.