The Illini game up short in a foul marred game Monday night in Milwaukee. Shooting only 11 free throws despite having a lead throughout most of the second half, the Illini couldn't overcome turnovers and a 20 free throw attempt deficit down the stretch. Even with an atrocious 26 turnover night for the Illini, the Golden Eagles could only shoot 18-31 from the free throw line to squeeze out a 67-66 victory on the road. The huge Illini advantage in rebounding (50 for the Illini compared to 30 for Marquette) was totally negated by the highest number of turnovers in the Brad Underwood era.

Kofi Cockburn will return from his three game NCAA suspension next Monday night in Kansas City versus Cincinnati.

Heat Check #1 - Belo Struggled Mightily in the Second Half 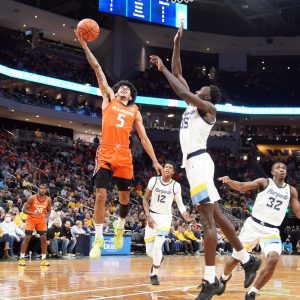 Andre Curbelo tried to win the game singlehandedly for the Illini - and he did so on multiple occasions down the stretch. He ended up with 11 points, 8 rebounds, and 7 turnovers. Costly turnovers and missed shots - Curbelo was 4-18 in the game and was 3-15 in the second half - allowed the Golden Eagles to capitalize on Illini mistakes to swing the game in their favor.

Curbelo had his shot blocked against bigger players several times. This is an event he's not used to due to the fact that when Kofi Cockburn is in the game, bigs have to stay on Cockburn. If they don't, Curbelo will dish to the big man for a massive dunk if his defender comes over to help on Belo. In tonight's game, Hawkins, Payne or Bosmans-Verdonk weren't enough of a threat to keep Kur Kuath at home. Curbelo has to recognize that and dish off to his open bigs - and it has to be a pass that they can handle. Not a circus catch. He's proven last year that he can do this well.

Curbelo needs to continue to dish to his teammates. For all the gushing about a strong game from Darryl Morsell by the television announcing duo, the Maryland transfer was outscored by Trent Frazier - and Trent scored his last points on a three pointer with 6:50 seconds left in the game. Frazier only shot two more times the rest of the game. He has to be looked for more often. Trent played too hard and too well to be reduced to a fan for the last six minutes.

Curbelo seems to have lost sight of what he did so well down the stretch of the B1G schedule last year. He scored when he had open shots, he made the defense pay for leaving Illini shooters open, and he limited his turnovers. Last night, he forced shots repeatedly. He left many teammates open without the necessary pass to take advantage of their situation (which is rare for Belo) and he repeatedly lost control of the ball and created opportunities for Marquette to score.

The Illini need the "old" Belo of the end of last season back - he was a player that helped engineer Illini victories and the NBA scouts loved him. Belo isn't going to take over games with scoring the way Ayo did. Belo is going to slice teams to ribbons with his dribble penetration and distribution of the basketball. That's not a bad thing - but it is different than what Ayo would do - and that's okay. 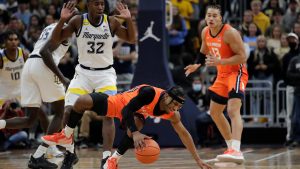 Curbelo was struggling mightily. The refs weren't giving any benefits of the doubt to the Illini. It would've been nice to see a few more sets where Curbelo wasn't expected to handle the ball as much and maybe use him as a decoy to free up Frazier, Hawkins or Grandison. There needed to be some sort of "change up" happening to break the momentum (or lack thereof). Maybe a time out could've been called on the last possession to allow the staff to set up a play to get others open.

Certainly, I'm not suggesting Coleman Hawkins will ever be the point forward, but change things up by pulling him out once or twice to bring the ball up and then set a high pick with the other big to initiate the offense. That would've pulled both defensive bigs away from the basket and opened the court up. There's a possibility that a weakside pick could've gotten Grandison or Frazier open underneath.

Let me be clear, I don't want Curbelo out of the game; he's too important to the team's success. He has to learn and he's going to make plays more often than he doesn't, but relieving some of the pressure might've helped. Doing the same thing over and over and expecting a different result has its merits when you're dealing with good players and hoping they revert to the mean, but it didn't work last night.

A team ending 26 possessions in a single game with a turnover is not going to win. On top of the turnovers, add committing 24 fouls to the mix and the result is an ugly loss to a team that the Illini should've beaten.

The Illini players (particularly Belo and Hawkins) must learn they can't control the referees.  They can control their turnovers - and 26 turnovers is a "can't happen again" event. Turning over the ball and then fouling on the other end set up this huge upset by a pedestrian Marquette team.

This Illini team is not young. Plenty of these players have played in the B1G and other players have played at P5 schools. There is no room for "amazement" at getting calls going against them on the road (or even at home). Collegiate refs make mistakes. The Illini players need to remember that they make mistakes as well - as illustrated by the Illini's 26 turnovers. How would they react if the referees gave them an earful of "coaching" after each mistake? What if the refs gave an eye roll and laughed as the Illini were getting stripped by Marquette players? No one likes to be "dissed" publicly - referee or player.

The players on any team cannot risk making a challenging situation worse by protesting every call or by making gestures and facial expressions that might anger a ref or cause him to take their response personally. A coach should not have to bearhug any player (Illini or not) to stop the player from getting a technical foul. This team needs to play basketball. They must focus on what they can control. If the players successfully limit their mistakes and avoid firing up referees, losses like this don't have to happen.

If one wants to understand the damage that turnovers can inflict on a basketball team, it was demonstrated for fans and players alike last night. Rarely does one see a game where one team outrebounds the other by 50 to 30 (like the Illini did) but that team only wins the fast break points battle by 20-19. Players cannot just hand the other team the ball (yes, I am talking turnovers) because it totally eliminated the advantages gained by a 20 rebound advantage. There's a reason why the Illini lost this game and it wasn't Kofi's absence. The team didn't take care of the factors they can control. The turnovers have to be minimized and it has to start next Monday night against Cincinnati.

There are a lot of teachable moments in this loss. I think the staff has a lot of material to work with. Now it's time to grind it out before next week's games.