Astros bounce back in Game 2 to even World Series

Orgeron says LSU can't practice due to too many injuries

Cardinals star Watt likely out for the season

Braves pitcher out after suffering broken leg on batted ball 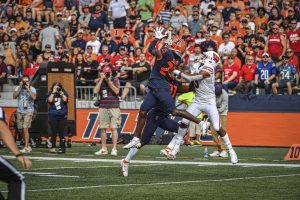 The beginning of Wisconsin week started with Illini fandom being cautiously optimistic. The Illini were coming off a win versus Charlotte and the defense was performing well, allowing only 20, 13, and 14 points in the last three games. Conversely, Wisconsin had lost 3 of their first four games - all to Top 20 teams - and had lost their previous two games by a combined 79-30. Illini fans were hoping for a close game - and maybe with a bit of luck there might even be a chance for the Illini to steal a victory at the end of the game.

The game against the Wisconsin Badgers also had a lot of colorful storylines to spice up the contest between two teams with losing records. The Badgers were the first team that Bret Bielema had earned his first head coaching job. The game also offered Coach Bielema the opportunity to win his 100th game as a head coach. And to top it off, this was the 2021 homecoming game for the Illinois team with a large crowd ready to tailgate and a little over 40,000 attending the game.

From my point of view, this game would tell us how good this Bret Bielema-led Illini team is - Wisconsin will be the measuring stick. This was a matchup of an Illini football team against a struggling Wisconsin team. Beware, these aren't your Bielema or Alvarez Badgers, they've fallen off since those days. This game could legitimately tell us how far away the Illini football program is from relevance. And I was worried that I might not like what the game will tell us.

Hail Mary #1 - The Quarterbacks, the Wide Receivers and the Offensive Line

After 7 games, the Illini quarterbacks have combined for a paltry 1009 yards of passing. The current pass completion rate for the Illini is only 53.1%. If you think that's low, Gary Moeller's 1979 Fighting Illini football team had a completion rate of 55.8% in his 3rd and final season. So you'd have been correct. The Illini quarterbacks have been arguably the worst in the B1G conference.

At this point, the quarterbacks who've played have been transfers into the program. Ironically, the transfer portal may be the only way to quickly solve this issue for next season's iteration of the Fighting Illini football program. There have been quality starting quarterbacks who've been benched at schools like Oklahoma. Coach Bielema certainly has a glowing track record if one looks at his work with Russel Wilson at Wisconsin. Grabbing a starter with a strong resume would be a high priority to return the Illini to football relevance.

While the quarterbacks have struggled, the fault does not solely in the hands. The offensive line has contributed to the issues of the quarterbacks, as well. They have allowed 14 sacks and numerous quarterback pressures despite a relatively small amount of attempted pass plays. It's very hard to throw the ball with the defensive line in the backfield as quickly as the quarterback can drop back into what should be a pocket. The line has opened up holes for the rushing game, but the team has to be able to execute pass blocking if they want to move the ball in the air. The line play is an impediment to that objective. They have to get better.

The wide receivers were advertised as being the 14th best group in a 14 team league. Sadly, they've lived up to that reputation. While there are reasons for hope - Isaiah Williams is incredibly athletic but he's a novice receiver who is improving rapidly and Deuce Spann has begun to build a reputation for making big plays - on the whole, the receivers struggle to get separation from defenders. This forces quarterbacks to essentially "thread the needle" to complete even relatively low risk pass plays. Great quarterbacks are famous for being able to do this, but they don't want to have to throw a perfect pass every time they drop back to pass - and the Illini are currently not blessed with any great quarterbacks.

The successful use of the transfer portal will be critical to help rebuild the offense quicker than recruiting high school students alone could accomplish. Coach Bielema and his staff will have to find difference makers from both the transfer portal and from high schools across the country. Thankfully, one would think the number of NFL lineman and running backs developed by Coach Bielema will be a way to positively influence recruits to come to Illinois. The coaches must also sell the opportunity to play right away and maybe even discuss difference makers linking with business owners to make some NIL money. There are reasons that players would want to help the Illini football program revive and thrive again and the staff has to sell this vision.

In an era with offenses scoring points in bunches across the country, the Illini have scored less than 10 points in two games. They have two more that they haven't exceeded 20 points - and have only reached 30 points twice. The season isn't over. There is time for improvements, but the results have to be measurable on the scoreboard. To date, the offense has been anemic and even a slight improvement might have allowed the team to win one, two, or even three more games. The clock is ticking on Coach Bielema having to make a decision on the fate of his offense for the seasons to follow. The team cannot survive and thrive in the 202os without scoring more points than the team is doing right now.

As a quick aside, for those who know me, I'm a Mike White fan. I like a passing offense that puts pressure on the defense at many points across the field. Coach Bielema is never going to be a "Mike White disciple" - and I don't expect my opinion to sway his. What I would ask of Coach is that when considering the evolution of the Illini offense, at least take a look at how coaches like Paul Johnson used the running game to attack the defense at many points across the field. He did it with the run the way Mike Leach did with the pass. There are ways to move the ball on the ground that don't require runs between the tackles. Please make the defense defend the whole field.

Please don't forget how well the offense ran in Wisconsin with Russell Wilson at the helm. A great athlete with the ability to run and pass is invaluable in the collegiate game. One way to address this is to recruit quarterbacks from states like Texas that have spring ball and advanced 7-on-7 leagues in the summer. If necessary, bring in a quarterback from a state like Texas (or others) each year and keep looking for the difference makers who are needed to win games. It can still be a ground-based offense, but it has to be innovative and run by a talented quarterback who can force the defense to defend the whole field.

This is simple. The Illini football program is in a bad place. After the challenges of the Tim Beckman era and the horrific recruiting of the Lovie Smith regime, Coach Bielema has a program that needs to be build up from nearly ground zero. How big of a job is it? Consider this: the Badger program that is in the midst of their most challenging year in many years, just proved to us today that the Illini are nowhere near where the the "weakened" Badgers are.

It's long way to the top -even if it's "just" the B1G West. Competition is a fierce and no one in college football takes any prisoners. The Illini have to improve their talent - and it has to start now. Based on Coach Bielema's comments in the Wisconsin post game press conference, it's clear he recognizes this.

The Illini program is a bigger rebuild than many wanted to imagine. The bye week is as good of time as any to accelerate the work on acquiring more talent. The Illini need that to climb the ladder. Make the bye week count.

I on the Illini - 9OT Fighting Illini Victory Over Penn State (S1, Ep60)

I on the Illini - Wisconsin Breakdown and Open Men's Basketball Practice Discussion (S1,Ep57)