Mike Cagley's Heat Checks and Hail Marys - Does Illinois Have a Third Star?

The Illini began the season with two acknowledged stars on this year's team - Kofi Cockburn and Andre Curbelo. They are the players that sell tickets both in Champaign and on the road. The NCAA's three game suspension of Kofi Cockburn has been frustrating to long time Illini fans who feel there is an NCAA bias against the Illini. After seeing the first two games of the suspension, should Illini fans consider the play of Coleman Hawkins to be a direct result of the suspension? Without Kofi on the floor, Hawkins has elevated his play to new levels. 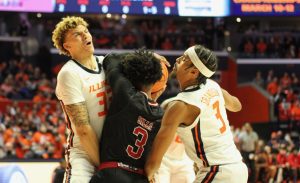 Coleman Hawkins had a stellar first half against Arkansas State. He led all scorers with 14 points. He also snared 8 rebounds (including 3 offensive boards) and distributed 3 assists to his teammates. As if that wasn't enough, Hawkins also blocked two shots and had a steal. That's quite a first half.

He's looking like he could run an effective high-low offensive set with Kofi Cockburn upon the All American's return. Hawkins is an offensive threat with a confident three point shot and his newfound willingness to drive. Tonight, he even added some slick assists to the mix. One wonders if Cincinnati will have a challenge of phenomenal proportions on their hands when Kofi returns.

Hawkins achieved a career milestone by earning his first collegiate double-double. He finished with 17 points and 12 rebounds. Marquette will represent yet another step up for the Illini in competition. Playing a Big East team on the road without Kofi Cockburn should be a challenge and a logical progression in the Illini's development. All eyes will be on Coleman Hawkins to see how he does against this P5 competition.

We may be seeing a star being born.

Despite only shooting 20% from the 3-point line (a very ugly 5-25 from beyond the arc) and shooting 60.5% from the free throw line (a poor 23-38 showing). the Illini managed to win by 39. That's bad shooting for a team with such high  expectations. Coach Underwood has said they have worked hard on defense and it's shown with their two easy blowouts without Kofi on the court. Now it's time to clean up the shooting.

With just a 10-25 effort from the 3-point line and a 30-38 from the free throw line, the Illini could've won the game by another 22 points (Giorgi would've called that amazing). And shooting 40% from the 3 and roughly 80% from the free throw line aren't unrealistic expectations. Leaving points on the board against Arkansas State isn't a big deal, but in Kansas City against a team like Arkansas, it can be the difference between winning and losing - and in the B1G it's critical to score when you have the chance. 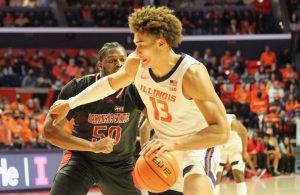 Benjamin Bosmans-Verdonk scored 8 points establishing his new career high and grabbed 10 rebounds for the second consecutive game. Having him play without apparent limitations due to pain from nagging foot injuries is a huge positive for the team. With both Payne and the Big Bossman (my own name for Bosmans-Verdonk) backing up Kofi, allows Coach Underwood options when either player struggles or gets into foul trouble when filling in for the All American. This roster has been build to provide waves of players for the Illini to deploy against opponents and the center position is just one example of superior roster construction.

Trent Frazier was able to erase two players from the scoring column when he was defending them. Whether it was Desi Sills who started the season with a 21 point scoring effort or it was Marquis Eaton who scored 15 points, with 13 coming in the first half, it didn't matter. Frazier effectively shut down Sills and then Eaton.

Longtime Illini basketball insider Brad Sturdy has said Trent is the best defensive guard that he has seen for the Illini in his years of covering the team. That is a high compliment as Sturdy has covered the team since the early 2000s. The team played very good team defense to boot, but Frazier is the ringleader when it comes to shutting down opposing teams and their best scoring guard. That is not an easy thing to do for a 6'1" guard, but he does it on a consistent basis.

Next up is a road game against the Big East's Marquette Golden Eagles. Shaka Smart takes over as the head coach of a team that has been predicted to be 9th or 10th in the 11 team Big East. That's the type of team you take over when the prior coach is fired. At the same time, this team is step up from a competitive standpoint compared to Arkansas State. Playing this game without Kofi will be a great measuring stick to see how this Illini team will deal with adversity on the road. Monday should be fun.