Friday was a crazy night in Champaign-Urbana. In a game that many fans and media had written off as an inevitable loss for the Illini, the Illini came within 4 minutes of shocking the B1G by handling the high powered Maryland offense. The Illini collapsed, fueled by offensive injuries and ineffectiveness which led to the defense not being able to stop a determined Maryland offense in the fourth quarter. 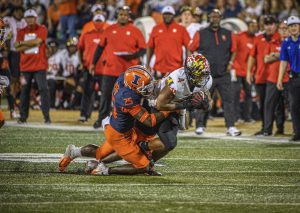 Holding Maryland to 10 points until 2:13 left in the game was impressive. The defense kept Maryland's offense off balance for most of the night. When the Maryland offense had it's chances to break the game open, they got too pretty, got in trouble with trick plays, and the Illini responded with strong defense to shut down drives.

The Illini gave up 481 yards, but they didn't break and allow touchdowns the way they did against UTSA and Virginia. Regardless of a challenging fourth quarter, largely fueled by Illini offensive woes, the Illini defense only surrendered 20 points. When the defense only yields 20 points, the game should be won. In a game designed to maximize offense, a team should be able to score more than 20 points during any given game.

With this type of effort consistently, this team will be more competitive than most had imagined after the challenges experienced against UTSA and Virginia. The Illini have proven that they can significantly slow down a high powered offense. Can the team translate this defensive success to a similar effort versus Purdue? We will find out in a week. Let's hope the Illini defense possesses a newfound confidence earned by a solid effort.

Hail Mary #2 - Offense Struggles but is a Star Born? 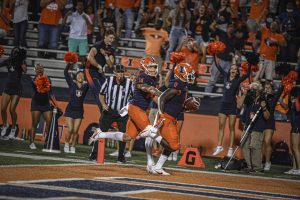 The offense struggled throughout the game, though we may have seen an emergence of a future star in Josh McCray. The imposing 6'1", 240 pound running back punished the Maryland defense. He ran over defenders, carried defenders and scored on a 38 yard run in limited snaps as he went out of the game with an injury. One can only imagine how effective Josh will be when he has an opportunity to run behind a bigger and better offensive line that Coach Bielema is assembling with his recruiting efforts.

McCray ended up with 8 carries for 60 yards and 1 touchdown. After he returns from injury, I can't help but wonder what kind of stat lines he will produce in the future. He certainly is a imposing back that the Illini haven't seen in their backfield for quite a long period of time.

The Illini-Maryland game on a Friday night represented an opportunity to compare and contrast life as a fan of the Illini (the previous 53 years) and as an IlliniGuy (year 54).

Prior to IlliniGuys, the buildup to a Friday night game begins as a cool exercise in trying to time the purchase of a pizza and getting it home in time to eat, still hot, at the exact moment that the kickoff flies into the air. This pregame mission can be stressful, but rewarding. If I still lived in Illinois, there would be no shortage of good pizza alternatives. In Texas, pizza is much more of a challenge. Instead, I settled for Tex-Mex. Life is like a box of chocolates.

After kickoff, it's managing the emotions of the team looking like it was going to win a game everyone had already marked as a loss. In true Illini fashion, the Illini had the game slip through their fingers late in the fourth quarter - losing the team's third straight game.

Fans have to deal with the frustration of the logical (but disappointingly wide) gap between actual super senior performance and the much higher super senior expectations. Fan visions of Coach Bielema somehow finding the way to turn this team into a bowl team are quickly dying a painful and agonizing death right in front of my eyes.

The game ends and for many fans the week of bellyaching before the next game (Purdue) begins. This happens in a fashion eerily similar to how it did during Coach Underwood's first two years as the Illini basketball coach.

As an IlliniGuy, gameday starts earlier and doesn't end until the early hours of Saturday morning.

During the day, it's working at the "real job" and letting IlliniGuy Larry handle coordination of the IlliniGuys coverage leading up to and during the game - along with the post game activities. The articles for Friday are put into place (lead times are always a challenge). Coordination of game time responsibilities have to be ironed out. Like a football team, a media team has to execute a plan in order to provide value to our subscribers.

When the game kicks off, it's time to get into the IlliniGuys Game Room (only available to IlliniGuys subscribers) and be ready to hang with a passionate but frustrated fanbase. The game proves to be a nerve-wracking and ultimately painful exercise. The result leaves a lot to be desired and the dropping off of a cliff during the fourth quarter stole a defeat out of the jaws of victory. The Illini team effort was there, but the execution - and ultimately the results were not.

At the end of the game - which felt like it could've been five hours long, it's time to fire up the Zoom call needed to record the I on the Illini podcast. Brad and Kedric were able to record right after the game ended from the press box. Matt Stevens joined after being down on the field and in the locker room. We were able to get the podcast recorded and posted on the web at just after 1 am.

After the podcast, it was Heat Check and Hail Mary writing time. It's never easy to try to find a new angle to write about. Only way to do it is to start, so I pulled together notes from the game to turn them into a semi-literate column. Now at 2:45 am, it's time to post the column and hope the fans are willing to read about the game in the morning.

Tomorrow, we'll worry about developing a plan for covering the Purdue game. The season moves on.