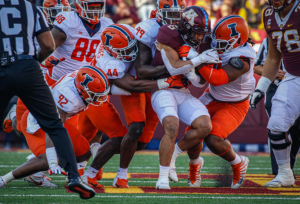 Today's game was another game that featured a strong defense, an offense that nearly shut down for a large portion of the game, and a final drive that held the ultimate fate of the game in it's grasp.

The Illini have played in 7 games that have been decided by a touchdown and a two-point conversion or less. The results have been mixed at this point:

As the Illini record stands at 4-6, it is easy to move the four losses into the win column and think that the team could easily be 8-2 and looking at an 8 to 10 win season heading into a bowl.

The Illini need to win two in a row - including what would be a 3rd highly improbable road victory over a ranked team at Iowa - in order to go bowling. A win over a team like Rutgers or Maryland could've made the Illini's bowl push an easier goal to achieve. With a couple of games, they could be there already.

In two weeks, the Illini will play Iowa on the road. They'll have the opportunity to win their fifth game to set up a grudge match versus archrival Northwestern on the Saturday after Thanksgiving.

If you're going to win on the road, you might as well do it on national television and against ranked competition. The Illini beat #7 Penn State on the road on ABC and they beat #20 Minnesota on the road on ESPN2. These are the types of games that really help recruiting. Maximizing the number of viewers is totally out of Illini control, but taking advantage of an opportunity to win in front of a bigger viewing audience is not. The team has won two improbable road games and is looking at winning a third in two weeks (Iowa). Let's get some great recruits and hit the transfer portal hard.

Hail Mary #2 - The offense looked great in the first quarter

And the combination of poor field position to start drives in the second quarter with an overly cautious play calling strategy resulted in a game that could have been won earlier if the team wasn't looking to "survive to punt". There were a couple of drives in the second half that looked like the team was not really attempting to get in position for even a field goal, when a third score would've effectively shut the door on the chances for a Minnesota comeback.

You don't usually see a team win with a drive chart like this:

If nothing else, this proves that "Bielema Ball" is tough to beat if the Illini can jump out to a lead early in the game and Coach Bielema can unleash the defense on his opponent.

On the road, the defense responded to the challenge of playing the #20 ranked Minnesota Golden Gophers and holding that high powered offense to under 300 total yards including a paltry 89 yards rushing. The Golden Gophers didn't score a touchdown until the fourth quarter and that touchdown was their one and only successful score of the game. That's not easy.

The Illini defense is evolving into one of the strongest in the B1G. The defensive backfield has improved dramatically as the year has progressed. The defensive line has won the battle for the line of scrimmage against both Penn State and Minnesota. There are two more games left and one is against a very formidable Iowa team. The Illini defense must play well to allow the Illini to have a chance to pull off their 3rd improbable upset on the road. We will see how they respond to yet another big challenge.