Nebraska fell to the Illini 30-22 in a game that was only kept close by a 75-yard run by Martinez with 3:48 left to go in the 3rd quarter. For the most part, the Illini used a strong second quarter to blow open the game and managed to keep the Cornhuskers at bay for the balance of the game. The opening drive in the second half that covered 75 yards, took 14 plays and burned 8:04 resulted in a touchdown that opened the game up by 14 points and allowed the Illini some breathing room when mistakes were made.

The victory helped Bret Bielema win his first game as the Fighting Illini head football coach. The Illini own their first ever B1G conference game win in August and are set to face UTSA in Memorial Stadium next Saturday at 6 pm on a BTN broadcast.

The night before the game, as IlliniGuys personnel were relaxing with a cold brew at Barrelhouse 34, a couple of Nebraska fans stopped at our table. Anticipation of an exchange of entertaining trash talking took a crazy turn. The Cornhuskers fans had actually stopped to tell us that the Illini would kick their butt, their team would choke when it counted, and Scott Frost should be fired. This wasn't what we were expecting. Not knowing how to respond, we were treated to a long list of reasons why the Cornhuskers were not a fun team to follow anymore.

This certainly begged the question of why one would drive 7 hours plus, pay for a hotel, pay for tickets to a game and then repeat the drive again. That seems like a ton of money to pay for a ship they clearly believe to be sinking. In the mode of trying to build bridges not burn them, the question remained unasked.

Whatever their logic, Nebraska fans have lost the ability to trash talk effectively. And they really hate Scott Frost.

Heat Check #2 - The fan predictions of the Huskers killing themselves with mistakes proved to be true. 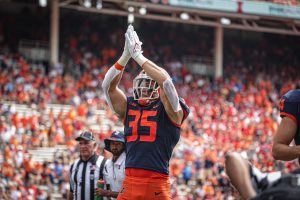 The Huskers indeed shot themselves in the foot several times to contribute in their own way to an Illini victory. An interception that should've given Nebraska the ball on the Illini 46 was reversed with a late hit on the quarterback and an unsportsmanlike conduct penalty as well. Instead, the Illini ended up with a first down and the ball on the Nebraska 24.

Husker QB Adrian Martinez continued his career marked by feast or famine results by fumbling after being hit by Keith Randolph. Calvin Hart, Jr. picked up the ball and sprinted 41 yards for an Illini touchdown.

Nebraska only connected on 1 of 3 point after attempts during the game. While the two points wouldn't have made a difference in the final score, one could argue strategy is much different knowing a touchdown will tie the game, versus having to score a touchdown and needing to convert a two point conversion directly after that score to tie the game.

Nebraska punting was spotty, only averaging 34.4 yards per kick compared to 45.3 for the Illini's Blake Hayes. Hayes also managed to place 4 of his 6 punts inside the 20 yard line. This included a punt that went out of bounds at a foot and a half from the end zone and a punt that led to a safety to open this season's scoring nationally.

This opening game win allows the Illini to entertain legitimate thoughts of winning a bowl in Bielema's first season as a coach. There are no guarantees in this world and winning consistently without a team's starting quarterback is no easy task. At the same time, the team has enough "winnable games" - UTSA, Virginia, Charlotte, and Rutgers to see them making it to the needed 6 games to play in a post season bowl. This doesn't mean they will, but the path to a bowl clearly exists. Now, it's time to see if the team can execute to the level needed for such a successful season.