The Illini football team exceeded expectations during their Saturday opener against the Wyoming Cowboys. When it came to the transfer portal, the Cowboys were one of the most plundered of teams, losing multiple quality starters to other teams. Even with their own additions, the Cowboys weren't able to plug the holes.

Head coach Craig Bohl has managed to lead the Cowboys to four bowl appearances in the last six years. After seeing the offense held to ten first downs, it makes one wonder if the Cowboys will have a chance to go bowling this season. It also makes this observer think that the hype around the Illini defense may not all be hype, it may be grounded in reality.

PTSD for Illini Football Fans Is Real and Legitimate

It was disappointing to see such a lightly attended initial game of the season. This is one instance where I choose to NOT place the blame on the current team or the the current players. This is more of a reflection of a very justified case of Illini football fan PTSD. It appears that many Illini fans, scarred by past and consistent challenges on the football field have adopted a "show me" approach to this iteration of the Fighting Illini football program.

It doesn't take a deep dive into analytics to understand where this PTSD comes from. The last time the Illini had back-to-back 8 win seasons was in 1989 and 1990. Thirty two years is a long time to wait for such an event to happen. To make things even more challenging to elevate Illini ticket sales, the team has only won 8 games or more just three times since 1992 (the first full season of Lou Tepper's tenure). Let's look at the seasons the Illini have won eight or more games since John Mackovic left to become the head coach at Texas:

It doesn't take a genius to understand in the last 30 years, an Illini fan has had so little to actually feel good about when it comes to the fall football season that blind faith in the team is a thing of the long-lost past.

To better understand how "fun and easy" it can be to be a fan, lets take a few moments to compare the Illini fan experience to that of an Ohio State fan. Let's see how many seasons Ohio State fans have experienced 8 win seasons or better since 1992:

As a comparison, the Illini are on a ten-year streak of having a losing record. It's not so easy to be a Fighting Illini football fan. As things stand right now, there's no comparison between the two football programs. This is the mountain that Coach Bielema and his team have to climb. They didn't have anything to do with creating the mountain, but it exists nonetheless. Coach Bielema's mission is to go over the mountain - or smash through it.

NIL, the Chicken or the Egg?

On Thursday June 2, 2022, Buckeye head coach Ryan Day asked the Ohio State football community for NIL funds of $13 million for this year. https://www.msn.com/en-us/sports/ncaafb/ryan-day-says-ohio-state-needs-dollar13-million-in-nil-deals-to-maintain-roster/ar-AAY2Qeu According to Coach Day, star quarterbacks, offensive linemen, and defensive linemen are needed to continue Ohio State's domination of the B1G - and they don't come  cheap. 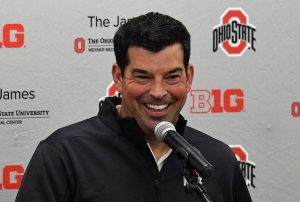 Predictably, the response in Ohio has been positive. Ohio State fans have up to 70 years of happy memories to draw upon. Supporting Ohio State football is like making the decision to "risk" investing in Apple. Due to the Illini's misfortunes in football over the last 30 years, investing in Illini football may feel like throwing money at Enron. The huge problem is if the "rich" keep getting "richer" - are teams like the Illini doomed to being in the B1G basement for the foreseeable future? 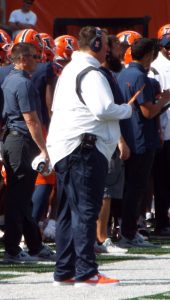 My answer would be no, and this is largely due to the fact that Josh Whitman has already solved one big part of the Illini football problem. He's hired a competent head coach and provided his coach a budget large enough to allow the coaching staff to be a competent staff up and down the line. Many longtime Illini followers regard this staff as the best staff since the White or Mackovic era. Clearly, having the best staff in 30 years is a big deal. The challenge is the staff needs the raw materials needed for success. The raw materials in the football world means players. Acquiring and retaining players means NIL (name - image - likeness).

The Illini coaching staff will need NIL funds to make his team competitive in the marketplace of the B1G conference and college football as a whole. The gap that Coach Bielema and Josh Whitman have to bridge is the urgency to sell the public to invest in Illini football as soon as possible. This means the financial support will, in many cases, precede the signals of hope for the future which some fans are holding out to witness. In short, a leap of faith is needed.

In this world of instant and constant change, the college sports landscape is a moving tapestry. Working in collegiate athletics is a lot like trying to walk on a flag while it's on a pole and blowing in the wind. Not easy at all. One thing is certain, inaction is not an alternative. Thus, the announcement signaling an Illini Guardians subscription is the first place to start a supporter's efforts to help the Fighting Illini athletes was critically important to communicate to boosters, fans and the community at large. https://fightingillini.com/news/2022/8/26/general-illinois-athletics-launches-nil-impact-campaign-to-support-name-image-and-likeness.aspx

The time is now for those who enjoy Fighting Illini athletics and want to contribute to be a part of something bigger than themselves to strongly consider joining the Illini Guardians http://www.illiniguardians.com to help keep the Illini competitive. We have seen what community, business and booster support coupled with a great coaching staff can accomplish over on the basketball side of things. Now it's time to see if that same effort can be made on the football side.

Far be it for me to tell anyone how to spend their hard earned money. However, I can make you aware of the opportunities which exist if you make a decision to contribute. It is important. It is timebound. Coach Day made national headlines at Ohio State with his message and we should let his words sink in. He's wanting to protect his team's seat at the head of the table of the B1G. In order to accomplish this goal, Coach Day is willing to communicate with full transparency and ask for the financial backing to keep winning. Coach Day is a subject matter expert (SME), so take his word on this subject, not mine.

When you look back at the last three years of Illinois basketball, we see what happens when the Illini have an excellent coaching staff and they are able to recruit well under the rules that are in place. Now, it's football's turn to shake up the status quo in the B1G. As an old man who's watched decades of Illini athletics, I can tell you that back in the 1980's, when the Illini were ranked in the Top 20 of both football and basketball, Illini sports provided the community, businesses and boosters a treasure trove of fantastic memories. With some timely investments, the 20's could be the same.