The Illinois coaches for Men’s and Women’s basketball as well as coaches from Maryland, Michigan, Iowa, Nebraska, Rutgers and Ohio State, met with the media on Thursday afternoon in Indianapolis. Illinois players Andre Curbelo and Kofi Cockburn also engaged with the media, with the rest of the Big Ten slated to attend on Friday. Here are 5 notable quotes from media day.

“The Players aren’t that bad. I’m cool with Kofi, I don’t know Curbelo too much but he seems cool. It’s really their fans. They just act like they’re some powerhouse in the Big Ten.” 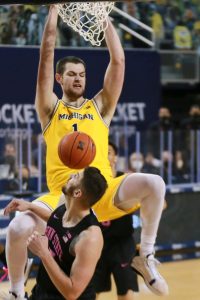 Hunter Dickinson from Michigan adds fuel to the fire that is the Michigan and Illinois rivalry. Honestly, this is great. Circle the dates of January 14th in Champaign and February 27 in Ann Arbor, when the two most talented teams in the league go head to head.

“I’m not afraid to say we are going to be better than last year.”

Andre Curbelo with a statement that may shock some casual fans. After all, Illinois was a top 5 team and #1 seed a year ago. But this team is deeper and shoots it better, so the ceiling may be even higher. Brad Underwood said simply, “Yes.” when asked if this team could be better. Who’s excited?

“To be determined. I think the one thing that happened last year was, I go back to the Indiana game when Ayo got in foul trouble and ended up fouling out, we gave the ball to Belo. Belo did it in a different fashion. He did it with the pass, and made two elite passes. I have a feeling he’s going to have ample opportunities to have the ball in his hands and he’s got a really good supporting cast around him, but he’ll just do it differently than Ayo did.” 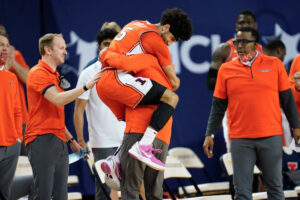 Brad Underwood has to replace the guy who was arguably the best closer in college basketball and although it may be closer by committee when it comes to who takes the shot, he has little doubt that it will be Sophomore Guard Andre Curbelo who will have the ball in his hands at the end of the game.

“I’ll be honest, I’ve probably learned the most I’ve ever learned in the last 3-4 months of my life. But sometimes you have to go through something really hard. You never stop growing.”

Nancy Fahey is in the Hall of Fame for her wins at Wash U., but that success hasn’t translated to the Big Ten level yet. Fahey has become more engaged in recruiting her type of players and now has a team that she knows and selected. They’re still young, but you should see some improvement, even in a loaded Big Ten conference.

“He uses it for motivation. His whole purpose of mentioning the Loyola game is to keep us one edge and make sure that we remember it. We need that as a team, to remember that loss. Whenever we are slacking or we have a mental lapse we hear ‘Loyola’. It definitely helps us remember it and keeps us on edge.” 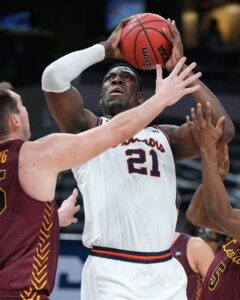 Kofi Cockburn has heard from Brad Underwood a lot over the first week of practices. It’s been mostly good, but when the Illini have a momentary lapse, Underwood isn’t shy about making sure they remember that when the ‘Everyday Guys’ have a bad day, it could be their last day.