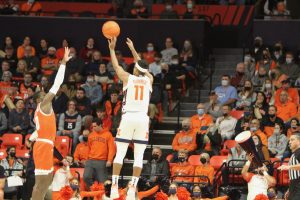 CHAMPAIGN, Ill. - All-American Kofi Cockburn scored a career-high 38 points and Alfonso Plummer continued his hot shooting with a season-high 30 points in his first start in an Illini uniform as 14th ranked Illinois held off a pesky Texas-Rio Grande Valley squad, 94-85.

Illinois (4-2) was missing starters Trent Frazier (knee), Andre Curbelo (neck), and Jacob Grandison and looked out of sorts for the first several minutes of the game with the new mix of players.  Except for Plummer.  The graduate student transfer from Utah hit seven three-pointers in Tuesday night's win over Kansas State in the consolation game at the Hall of Fame Classic in Kansas City and picked up right where he left off.

The 6'1" lefty hit a pair of threes early as the Illini took an 8-4 lead in the opening minutes. But then they went cold, missing their next six shots and allowing the underdog Vaqueros to go on a 16-2 run and take a 20-10 lead. UT-RGV hit 10 of their first 16 field goal attempts before the Illinois defense woke up and allowed just four made field goals in the final 13 minutes of the half.

That when Cockburn took over.  The 7-footer was held without a field goal until a layup at the 12:46 mark snapped the Vaqueros' run and launched Kofi's big night.  The junior big man was without peer on the interior, scoring on a variety of layups and dunks inside, often beating double and sometimes triple-teams. Cockburn was 15-of-19 from the field and an impressive 8-of-11 from the free throw line.  A career 61 percent shooter at the free throw line, Cockburn is hitting 68% (19-of-28) in his first three games this season.

Cockburn surpassed his previous best of 33 points against Minnesota last December 15th and came just two points shy of putting together just the eighth 40-point game in Illinois history.  That's a mark that hasn't been reached by an Illini since Malcolm Hill scored 40 vs. Northern Kentucky on November 13, 2016.

Illinois led 39-37 at halftime, but both teams left their defense in the locker room at halftime.  Both shooting better than 60 percent after intermission and trading baskets for much of the half.  Illinois never led by more than four points in the entire game until a pair of Cockburn free throws - his final points of the night - with 1:03 remaining gave the home team a 90-85 advantage.

Plummer finished with six three pointers and is 13-of-20 in his last two games.  The super senior, considered the top long-distance shooter in the transfer portal last spring, is hitting 47% from the arc (18-of-38) to start his Illini career.

Illinois returns to action Monday night when Notre Dame visits as part of the ACC-Big Ten Challenge.  That game tips off at 8pm CT and can be seen on ESPN2.