Kofi Cockburn will be playing college basketball next season but several questions remain about his upcoming junior season. 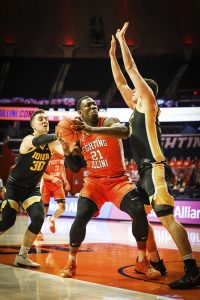 The 7-foot, 290-pound center, who was named as a consensus second-team All-America selection last season at Illinois, has officially withdrawn his name from the 2021 NBA Draft but has also publicly stated his intention to investigate his transfer options for his junior season of college basketball.

Cockburn announced on Instagram he would be playing another year of college basketball but has made it very clear in multiple media reports that he’s not at all set on returning to Illinois for his third season in Champaign.

In an article on ESPN.com, Cockburn told basketball reporter/draft analyst Jonathan Givony Tuesday that he intends on taking visits to other college campuses and his interest does include Kentucky after the Wildcats hired two Illini assistants (Orlando Antigua and Ronald ‘Chin’ Coleman) to John Calipari’s bench this offseason.

Antigua was the lead recruiter for Cockburn when the Jamaican native from Oak Hill Academy in Virginia committed to the Illini on Jan. 9, 2019 and signed his National Letter-of-Intent a few months later in April.

“He's the reason I went to Illinois," Cockburn said to ESPN.com about Antigua. "When he left along with Chin Coleman, I decided to go in the portal to leave my options open.”

Early entrants had until Wednesday to withdraw from the NBA Draft and maintain their college eligibility but there’s still the issue yet to be worked out by Illinois’ compliance office and the NCAA Committee for Student-Athlete Reinstatement involving Cockburn selling autographed items on Players Trunk. As of today, three of Cockburn’s items are still available for purchase on the website including a signed 8x10 photo for $40, signed authentically-worn Illini practice jersey for $500 and a pair of authentically-worn Illini practice shorts for $125. Cockburn’s items on Players Trunk were sold before July 1 when the NCAA allowed individual state’s to author in legislation making it legal for college athletes to profit off their name, image and likeness.

The final piece of Cockburn’s junior season is whether he’ll be able to take advantage of the state of Illinois’ new NIL legislation to allow college athletes to sign deals with specific countries. In some cases, international students without any U.S. citizenship will need to check their status agreements with the federal government to see if their visa allows for them to be employees while in this country as students. Cockburn moved from Jamaican to Queens, New York in 2014 to be with his mother after she arrived in the United States five years earlier. IlliniGuys.com has reached out to spokespeople in the University of Illinois athletics department for clarification on Cockburn’s status as an international student.

In the 2020-21 season, Cockburn averaged 17.7 points per game and 9.5 rebounds per game, both of which were career highs, However, in the pace-and-space world of the modern professional game, Cockburn was projected by most draft analysts to go undrafted in the 60-pick NBA Draft selection process scheduled to take place on July 29 from the Barclays Center in Brooklyn, New York. Cockburn told ESPN.com he didn’t take kindly to the feedback he was getting from professional scouts throughout this summer as he recently participated in the G League Elite Camp in Chicago last month.

“I think I'm ready for the next level, but I wasn't happy with the input I was getting from NBA teams," Cockburn said to ESPN.com. "I didn't want to settle. I'm going to return for another year, raise my game and improve my draft stock."

Cockburn announced last week he had placed his name in the transfer portal before the July 1 deadline to be considered an instantly eligible transfer player for the upcoming 2021-22 season. However, what is also unclear about Cockburn’s intentions is whether the market for him could include anybody besides Illinois or Kentucky.

“There's a possibility I return to Illinois and a possibility I don't," Cockburn told ESPN. "I want to make a quick decision as soon as possible. I don't want to go back and forth. I'm going to take some visits, but I'm not sure where."