The news was confirmed by a University of Illinois athletics spokesperson Thursday afternoon after the news was first reported by Pro Insight director of scouting Andrew Slater.

Cockburn, who is also still going through the NBA Draft process and recently participated in the G League Elite Camp in Chicago last month, had until midnight Thursday evening to officially put his name in the transfer portal and be eligible for participation in next season’s college basketball schedule. Early entrants have until July 7 to withdraw from the NBA Draft and maintain their college eligibility but Thursday’s news will also allow for Cockburn to be immediately eligible to play college basketball at another school. 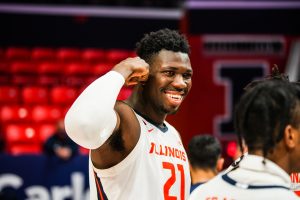 Cockburn earned consensus Second Team All-American honors during the 2020-21 season. The 7-foot, 285-pound center was named as a consensus second-team All-America selection last season while averaging 17.7 points per game and 9.5 rebounds per game, both of which were career highs with the Illini. Cockburn is projected by most draft analysts to go undrafted in the 60-pick NBA Draft selection process scheduled to take place on July 29 from the Barclays Center in Brooklyn, New York.

Under NCAA rules, once a player enters the transfer portal he no longer is under the scholarship limitations of his former institution and can freely discuss a transfer option with other school. However, that former school is now no longer obligated to provide the player in the portal with the benefits of his grant-in-aid agreement including academic and athletic instruction.

Illinois has not removed Cockburn from its 2021-22 roster on its website and Cockburn has yet to make any public statements about his basketball future.
After the losses of Ayo Dosunmu (declared for the draft), Adam Miller (transferred to LSU) and Jermaine Hamlin (transferred to Eastern Illinois), Illinois is currently sitting at 11 scholarship players (two under the NCAA limit) following the additions of Super Senior players Trent Frazier and Da’Monte Williams, Florida transfer forward Omar Payne, Utah transfer guard Alfonso Plummer and three freshman (Brandin Podziemski, RJ Melendez and Luke Goode).

A decision by Cockburn to return to Champaign and a transfer addition would put the Illini at the limit before the start of the upcoming fall semester when preseason practices are set to begin.