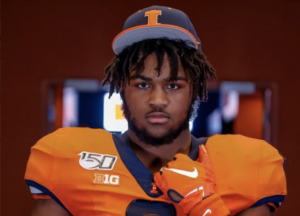 Johnny Newton has been dreaming big since way before he got to Illinois.

The Saint Petersburg, Florida native wants to design cars one day, and he hopes to get into the Grainger College of Engineering at Illinois to study mechanical engineering.

But, for now at least, Newton is focused on football.

Newton made a strong impression in his freshman campaign with the Illini, starting twice at defensive tackle and playing in all eight games of the team’s 2-6 campaign. He racked up 23 tackles, was forced a fumble against Purdue and had 1.5 sacks and tackles for loss.

But he also acknowledged that the fall was a difficult transitional period, mostly because of the elevated level of play in the Big Ten.

“Last year, it was pretty hard, I’m not going to lie, adjusting to the speed of college,” Newton said. “Coming from high school, everything is slow, I’m dominating everything. But in college, everything happens right then and there.” 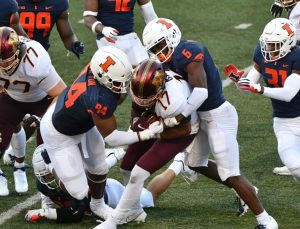 Newton had hit it off with former Illini defensive tackles coach Al Davis, a new hire on Lovie Smith’s staff. On a defensive line that didn’t have many proven contributors, Newton stuck out as a promising young player.

At the end of the season, of course, Illinois fired Smith, bringing in Bret Bielema and the new coaching staff. Davis has since landed softly on Missouri’s staff.

And Newton has picked right back up where he left off, connecting with new defensive line coach Terrance Jamison, who previously coached Purdue’s defensive line and was on Bielema’s staff at Wisconsin.

Newton said the staff has started smoothly with most of the team, and that there’s a different feeling around the building.

“Not even just me, the whole defense is excited, really,” Newton said. “We like where it’s going so far. We feel like Coach B and Coach J-Mo, we really have a good plan going on. We feel like this season will be really good, defensive-wise and offensive-wise.”

Already, Newton is beginning to note differences in how things operate around Memorial Stadium.

For one thing, Bielema prefers to practice with more physicality than Smith, who took a more NFL-like approach that often minimized contact in practice. That method had its benefits, like helping to mitigate injuries, but often showed on the field, especially when Illini defenders struggled to make routine tackles and seemed to often take bad angles on ball carriers.

Newton is a fan, and improving the physicality with which he plays has been a recent focus. 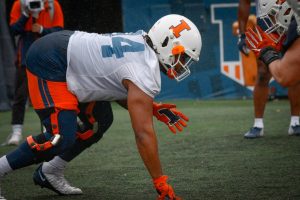 “Everybody’s a lot more physical now, for sure,” Newton said. “Sometimes, myself, I’m a little soft. I just have to be more physical, way more physical on the field, working to get off blocks.”

The Illini haven’t committed to a scheme yet, but Bielema will deploy a more adjustable defense than Smith’s rigid Tampa 2.

“It definitely gives us a great variety of choices to pick from, pass and run-wise,” Newton said. “I feel like it’s more flexible than last year’s defense. We can move a lot more people around on the field and get a lot more people in for different formations.”

After years of getting carved up by opposing quarterbacks who have too much time in the pocket and plenty of downfield options, the shift in defensive sentiment is likely a welcome development for Illini fans.

For players, the shift adds more work. More to learn, master and execute, but that’s alright with Newton.

So far, Jamison also presents a bit of a change from Davis’ coaching style. More soft-spoken instructions and a major emphasis on film are just two differences Newton highlighted.

“He wants us to get overtime in, watching film, and I do that a lot,” Newton said. “He teaches me. Every little mistake, he gets on me. He might be quiet, but like he has his moments for sure. He always wants us to perfect anything, even if we have to go slow doing it, he wants us to perfect it. Coach Jamison is a really good coach. I really like them a lot.”

The Illini return many of the contributors on the defensive front, including defensive ends-turned-outside-linebackers Owen Carney, Isaiah Gay, Seth Coleman and Ezekiel Holmes.

The group is still an area of question for this team, but players like Newton and another redshirt-freshman, Keith Randolph, are young talents that look poised to make a significant step forward this fall.

Newton said teammates are now turning to him for advice and as an example, a notable change from the fall when he was simply trying not to sink in his first season of Big Ten football.

It’s a little unnatural, but Newton is embracing the challenge.

“The incoming freshmen who just came in during December, I’m teaching them stuff now,” he said. “It’s pretty hard adjusting to, me being one of the older people when I’m one of the youngest on the team. It’s me maturing on a football level now, more than anything.” 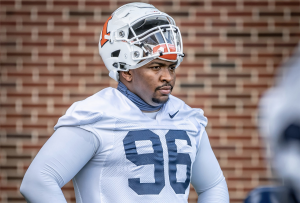 But there are still vets like Roderick Perry — a South Carolina State transfer who was a revelation at defensive tackle — and longtime rotation player Deon Pate to show the way and give Newton pointers.

“They’re always telling us what to do,” Newton said.  ”We ask them for corrections and stuff, Coach (Jamison) always helps us when we do wrong. I feel like it’s all good that we’re all young so we can come up together and learn more.”

Perry, who was an All-Big Ten honorable mention after racking up 17 tackles, 2.5 tackles for loss and 2.0 sacks, will likely start at defensive tackle.

Newton, who started twice in 2020, said he might bounce around the line a bit, but he’s got a good shot to slot in alongside Perry as the other starter.

To make that a reality, Newton knows he’ll have to continue to improve, carrying momentum from an impressive fall and from winter workouts into the spring. 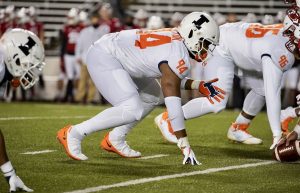 Looking back at his performances, Newton is proud. He was strong against the run, and the Illini can use a strong interior presence like Newton going forward, especially after guys like Perry move on after this fall.

There is plenty to improve upon, and Newton is mainly focused on how he can become a better pass rusher.

Eager to break into the backfield however he can, Newton also hasn’t dropped his attempts to lobby the new staff into giving him a shot at running back. The former high school ball carrier said he’s kept reminding his coaches, albeit mostly jokingly, that he can haul when handed the ball.

“I mention it every day that I played running back,” Newton said through a laugh. “I try to get myself in there. They know.”