The University of Illinois has ended the exploration of adding a D-I men’s ice hockey program. 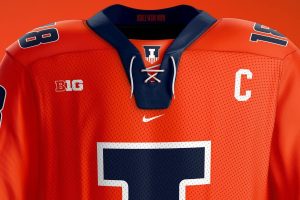 CHAMPAIGN -- After more than five years of planning and exploration toward the project, the University of Illinois athletics department has ended the idea of birthing a Division I men’s hockey program.

In a statement released by the Illinois athletics department and athletics director Josh Whitman, the university confirms it is no longer pursuing a project that in March 2020 was “in the red zone, for sure” from being launched.

“After more than five years of extensive evaluation and intense effort to generate interest and support, we have determined that it is not viable to bring Division I men’s ice hockey to the University of Illinois at this time,” Whitman’s statement reads.

Illinois hasn’t added a Division 1 sport since the implementation of women's soccer in 1997. In June 2017, Illinois athletics announced the creation of a feasibility study for the Illini to being the state’s only Division 1 college hockey program. The study, which Illinois partnered with the National Hockey League and included now-former front office personnel of the Chicago Blackhawks, was released to the public nearly a year later in March 2018.

“The strong consensus of everyone involved in college hockey is that NCAA men’s hockey will flourish at the University of Illinois," said Mike Snee, executive director of College Hockey, Inc., who joined with the NHL and NHLPA to commission the study. "From the number of native Illinois players currently playing college hockey to the continued growth of youth hockey players in the state, there are many reasons to be confident that the Fighting Illini could quickly become a top national program and sustain it every year. We are very appreciative of the university administration’s willingness to consider bringing NCAA hockey to Champaign."

Penn State added Division I hockey in 2012 as the seventh program in the Big Ten Conference after billionaire alum Terry Pegula, who also owns the NFL’s Buffalo Bills and NHL’s Buffalo Sabres, donated $102 million to pay for the new arena and other costs of starting the program. The Nittany Lions received NCAA tournament bids in 2017 and 2018 while also clinching the 2020 Big Ten Conference regular season championship.

However, Whitman’s statement on Monday afternoon cited the worldwide coronavirus pandemic as a major reason that funding for the project became not viable after 2020 shortly after it was considered almost off the ground.

“Since we began our exploration of hockey years ago, meaningful landscape changes have pushed us to this unfortunate conclusion. We have stated repeatedly that we would not advance the hockey project without a sound funding and financial plan. To date, we have been unable to generate the financial support necessary to greenlight the project — a concern that grew even more daunting through the pandemic, when we saw cost projections for the new facility increase by 30 percent,” Whitman’s statement reads. “In addition, as has been well documented, college athletics is now existing in an incredibly fluid, dynamic environment, including Alston awards, NIL, and student-athlete employment rights. We are investing heavily in new benefits for student-athletes, which increases the marginal cost associated with any new sport offerings. Such intense disruption has created ambiguity about the future, and we believe it unwise for Illinois Athletics to expand our sport model in such an uncertain environment.”

Illinois hasn’t added a Division 1 sport since the implementation of women's soccer in 1997. Since 2012, only three schools have added a Division I men’s hockey program: Arizona State University, Long Island University and the University of St. Thomas (St. Paul, Minnesota). When the U of I study was commissioned in 2018, the state of Illinois produced 85 players on NCAA Division 1 hockey rosters (not including the players who skip college to immediately play minor league hockey at 18 years old), which is twice as many as hockey-popular states Wisconsin and Pennsylvania.

“My heart believes that we can support hockey, but my head tells me it is time to direct our attention elsewhere,” Whitman statement reads. “We must continue the upward momentum that Illinois Athletics has created in recent years, and that will require the focused energy of our staff and our community in the years ahead.”