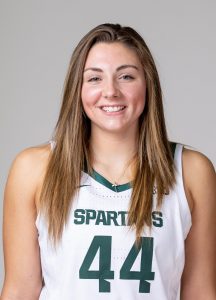 Early in their careers, junior guard Naya Ephraim, sophomores Kennedi Myles, Jeanae Terry and freshman Aaliyah McQueen were supposed to be key contributors, but their efforts didn't lead to wins for Fahey.  Last season Illinois had a record of 5-18, that included a 2-16 mark in Big Ten play.

Tuesday night, Illinois received a transfer commitment from Michigan State's Kendall Bostic, a 6-foot-2 native of Kokomo, Indiana. During her prep career,  Bostic was the number 16 player nationally at her position and the No. 67 overall prospect, per ESPN HoopGurls. She was one of just seven players in Indiana history to score over 2,000 points and grab over 1,000 rebounds in her high school career.

Bostic felt her career was not going in the direction she wanted with the Spartans. She looked at what the Illinois program could offer in her remaining three years of eligibility, and the rest is history.

"I really like the idea that I could have an impact and make a difference within their program. I really feel as though I can make a positive impact on the program, and I would love to see this team make it into a post-season tournament within my time here. I feel as though for the last several years, the staff and players have established the foundation and culture of the program, and I would love to be a part of that," Bostic said.

Do not let the low-scoring freshman season numbers fool you: 4.2. points per game, grabbing 2.9 rebounds and shooting 53.2 from the field. Bostic feels there is more in the tank, and Fahey agrees.

"I know they can win at Illinois. I know they have a lot of talented players who are young. I want to help in any area I can where that is setting a screen to get someone open, making an extra pass, or taking someone on the low block," Bostic said.

When Bostic knew it was time to leave, she had several programs reach out to her, especially those who recruited her in high school. She picked the Illini over Indiana, Iowa, Wake Forest, Vanderbilt, and Penn State.