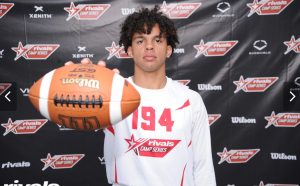 Week after week, the new football staff at Illinois continues to amaze their fan base. Now you have to wonder what the other Big Ten coaches are thinking to themselves.

The once sleeping football program is now wide awake and ready for take off.

Those in the Illinois camp were not sure they would land Miller.  But like all of the recent members of the class of 2022, they believe they are going to win at Illinois and trust this staff like no other. Their recruiting pitch must be locked up with a combination only known by the staff.

According to other recruiting services, 24/7 Sports list Miller as the number 67 wide-receiver in his class. Rivals.com ranks him at 73.

Miller picked the Fighting Illini over the likes of Arizona, West Virginia, Indiana and Miami.

The three-star speedster caught a lot of eyes with this one, because skilled players from Florida typically do not jump at the Big Ten.  Miller is a physical player who appears to be Big Ten ready after adding weight.

Previously Miller told IlliniGuys.com, “Coach Bielema is a winner, he has a plan that he laid out to all of us and we’re buying in. I absolutely love the new facilities they have up there, and it’s a great academic school.”

The losing culture appears to be a thing of the past; this new crop of Illini recruits have a chip on their shoulders. They are coming to win and to change the perception of Illinois football.

Miller says he is glad that COVID-19 has been somewhat tackled; being able to visit the schools on his list helped him to make a decision.

Also it must be noted that Illinois receivers’ coach George McDonald played a big part in landing Miller. The two hit it off early in this recruitment and McDonald never let up. Landing Miller adds to the impressive depth at this position of need.  Hank Beatty, Elian Pugh and Ashton Hollins have already committed and this demonstrates the emphasis that this staff is putting on its receiving corps.