Former Syracuse quarterback Tommy DeVito has decided to transfer to Illinois and will compete for the starting job in the 2022 season.

CHAMPAIGN, Ill. -- Illinois has found a quarterback out of the transfer portal with multiple years of starting experience at a Power Five Conference school.

Tommy DeVito will still be wearing orange and blue next season as the former Syracuse quarterback has selected Illinois as his transfer destination for the 2022 season. 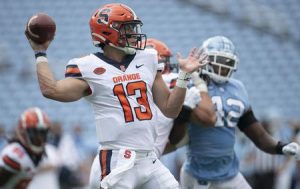 The news comes a week after sources inside and outside the Illini football program and sources close to the player himself confirmed to IlliniGuys.com that DeVito was on the Champaign campus for an official visit. DeVito is the first FBS transfer to announce his intention to join the Illini this offseason as Illinois head coach Bret Bielema continues to reshape his program’s roster following a debut season that ended with a 5-7 overall record but impressive conference road wins at Penn State and Minnesota.
DeVito, a 6-foot-2 and 208-pound quarterback with one year of eligibility remaining, was a starter at Syracuse for more than two years and was a prized recruit for then-new Orange head coach Dino Babers. DeVito, who will turn 24 years old during preseason camp next August, announced he was entering the portal on Oct. 17 and left the Syracuse program after posting 3,866 career passing yards and 28 passing touchdowns.

“Tommy was very mature about the things he expressed to me,” Babers said to local reporters in October shortly after DeVito announced his intention to enter the transfer portal. “Those were some private things and we’re tied at the hip. I love that guy. He’s going to always be a part of our family. We’re going to always root for him and we wish him nothing but the best. We really do…(DeVito) knows that I’m always rooting for him and I hope that he gets everything he’s looking for because he deserves it.”
DeVito, who is expected to enroll in this upcoming semester, would be expected to get a majority of the first-team reps this spring as Artur Sitkowski will be sidelined for the spring session after undergoing surgical procedure on his throwing shoulder that followed a surgery to correct his broken wrist suffered in the win at Penn State.

Unlike the program savior tag he was handed by fans upon signing with Syracuse in 2017, DeVito will be expected to be the veteran presence that can simply make Illinois’ passing attack (which ranked last in the Big Ten Conference and 120th of 130 FBS programs at 156.2 yards per game) a viable option to balance out a running game that returns tailbacks Chase Brown and Josh McCray.

Before being benched before the fourth game of the season, a move that subsequently led to him entering the transfer portal the following week, DeVito entered the 2021 season ranked in the top 10 all-time at Syracuse in completion percentage (seventh - 58.6), passer rating (eighth - 128.1), passing yards per game (seventh - 144.9), touchdown passes (seventh - 27), completions (ninth - 305) and passing yards (10th - 3,478).

“It didn’t work out the way that we both anticipated, but I hope that it works out the way he anticipates somewhere else,” Babers said. “I will do anything in my power to help him wherever he wants to go. He’s going to get a recommendation from me.”

DeVito arrived at Syracuse as a much-heralded four-star prospect from the nationally recognized Don Bosco Prep School in New Jersey and was ranked one of the top ten pro-style quarterbacks by ESPN and 247Sports.com in the 2017 recruiting class. Coming out of high school, DeVito was rated by 247Sports.com with a higher grade among pro-style quarterbacks than current New England Patriots first round pick and rookie starter Mac Jones and higher than current Notre Dame starter Jack Coan. DeVito was selected as a national finalist for the Elite 11 quarterback camp competition in 2016, known as an event for the top quarterback prospects in the nation.

DeVito is seen as a drop-back passer that excelled in Babers’ pass-happy system out of the pistol and shotgun sets but also used his feet early in his career out of designed draw plays and scrambling out of trouble. The two concerns for DeVito is he struggled through various injuries and poor offensive line play at Syracuse that saw him sacked 81 times in his 26 career games from 2018-21 with the Orange program.