CHAMPAIGN, Ill. -- One of the first thing that Bret Bielema learned about coaching Tommy DeVito is the former Elite 11 quarterback’s ability to process information in a nonchalant way.

And frustrate his coaches to no end because they’re not sure he’s paying attention.

“Sometimes I have to grab him by the shoulder or face mask and say ‘Are you listening to me?’ and he’ll go “Oh yeah coach, I got this. No worries’ and then you just know he’s paying attention in his own way.”

“That’s Tommy!” Clarke exclaimed. “That’s who he is in every way. Early on when I was working with him, he would have this tendency to look at the field when I was talking at then you’d say ‘What did I just say?’ and he would repeat it perfectly and say ‘I’m picturing it in my mind. I got this’.”

The second and possibly more important thing Bielema learned about DeVito long before he got on a practice field on the campus of the University of Illinois is the Syracuse transfer has likely never suffered a day where he misplaced his confidence.

“Tommy does not lack confidence, for sure,” Bielema said. “He’s Jersey through and through. I think came in fitting really well with our guys, especially in the wide receiver room. This summer I think he’s been able to build a great rapport with our guys.”

In his only game in a Illinois jersey, DeVito made a good impression for Illinois’ Orange and Blue Spring Game in April as he finished that evening 16 of 20 for 248 yards and three touchdowns without an interception while competing mostly against the Illini’s second-team defensive unit.

“I think in the spring game, it kind of gave you a glimpse of what he’s capable of doing,” Bielema said. “He’s definitely got a live arm, a very accurate arm. Does have the ability to get the ball in some tight windows. Sometimes he gets a little too gunslinger for me. But I think he’s learned what we’re asking.” 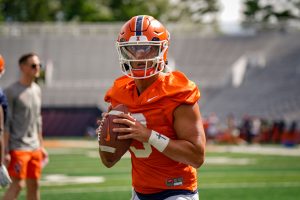 DeVito will be the fifth different starting quarterback for the Illini program since 2019. Since Lovie Smith’s debut as Illinois head coach in 2016 (a 52-3 win over Murray State), Illinois will have five different quarterbacks (Wes Lunt, Chayce Crouch, AJ Bush, Brandon Peters and the 2022 starter) start a season opener.

“Tommy has had an incredible fall camp and I would also say Art (Sitkowski) has been playing his best football in this fall camp as well to put himself in a great situation,” Bielema said Thursday morning. “I think Tommy has made a big jump from last spring to where we are in terms of his composure in the pocket and learning how we need him to play in the game.”

DeVito, a 6-foot-2 and 208-pound quarterback with one year of eligibility remaining, arrived in Champaign this spring after verbally committing to the Illini program on Dec. 10 after being a starter at Syracuse for more than two years and was a prized recruit for then-new Orange head coach Dino Babers.

DeVito, who turned 24 years old on Aug. 7, left the Syracuse program after posting 3,866 career passing yards and 28 passing touchdowns but injuries and a consistent losing mentality of the Syracuse roster led to indecision among the coaching staff at the quarterback position. These four years at Syracuse did very little to rattle the confidence of the former four-star prospect from Don Bosco Prep - one of the nation’s elite high school programs on the East Coast of the United States of America.

"One thing I noticed about Tommy is when things are down he's never down," Illinois wide receiver Isaiah Williams said. “When you can have that one guy, especially at quarterback, who is never too high, never too low, even-keel ... it's special. Everytime we touch that field with him we know, 'Alright, let's make a play for him or he's gonna throw us a good ball. All we've got to do is catch it.'”

The last time an Illinois quarterback has been able to make it through all 12 regular season games of a season (without being subbed out in blowout situations) is 2015 when junior Wes Lunt attempted 270 of the 285 passes throughout the season.

Sitkowski is returning from a 2021 campaign that ended with multiple offseason surgeries that forced him to miss spring practices.

Bielema has suggested that despite Sitkowski being labeled as the backup, the Rutgers transfer will likely be needed in some form during a four-month season.