Illinois looks to utilize the tight position more in 2021 as arguably the most position with the skill position with most returning production but also the most changes beyond its two obvious starters. 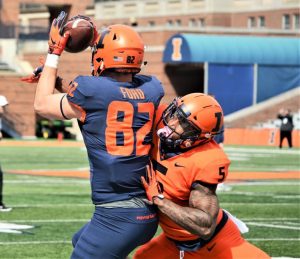 The answer to the question of the position on Illinois’ offensive depth chart that has been altered more at Illinois without having the identity of the responsibility be changed is tight end.

The top of the board remains the faces that all Illini fans can and should recognize as Daniel Barker and Luke Ford will emerge as the safety blanket recipients down the middle of the field for quarterback Brandon Peters in the passing game.

Barker, who finished the 2020 campaign with 19 catches (second on the team) for 268 yards and two touchdowns, must be able to use his 250-pound body to contribute in the run game as a blocking presence. Ford, who started two games at tight end last season, is somebody who has proven himself to be a reliable blocker but the transfer from Georgia has yet to translate his hype as the consensus top ranked 2018 recruit in the state of Illinois.

It is expected that, due to the conversion to offensive coordinator Tony Petersen’s pro style offense and Illini head coach Bret Bielema’s historical insistence that the tight end be an essential component, Illinois will come out in 2021 with a consistent two tight end look in early down situations. When you evaluate how the Illini are deficient in terms of returning production and talent at wide receiver, utilizing the tight end in the middle of the field for Peters’ big targets just makes a lot of sense.

However, the top 1-2 combo of Barker and Ford are similar in body type but dissimilar in how they like to be utilized as Ford has already established a desire to put his hand in the ground near the line-of-scrimmage but Barker is identified as a specialized target as a big slot receiver option and scoring threat inside the red zone with 46 career receptions over the last three seasons.

Look for Michigan State transfer Max Rosenthal and Northern Illinois transfer Mike Cerniglia Jr. to be in front of the lead tailback in a H-back role in Illinois’ big packages when they utilize a multiple-back formation or what the Illini coaches will call a 22 package (two running backs, two tight ends).

The Illini moved three players from other positions to tight end Michael Marchese (from linebacker), Cooper Davis (from defensive end) and Preston Engel (from offensive line) and they’ll need at least an entire season to adjust to their new surroundings.

When asked to describe the tight end position at Big Ten Football Media Days in Indianapolis, Bielema mentioned the obvious names of Barker and Ford but then the next name he said he was impressed with from a body type saying “you guys are really going to be impressed with the physicality” was preferred walk-on Branden Hohenstein. The senior transfer from Abilene Christian, who also started his college football career as a walk-on at Nebraska, had 39 career receptions for 521 yards and three touchdowns at the FCS level over the last two seasons. You can expect him to compete for playing time behind the obvious two starters but there’s an opening for a specialty skill set in Illinois’ big packages and Hohenstein’s athleticism at 6-foot-4, and 230 pounds is something to pay attention to at least in the beginning of this season.