With the close of the summer AAU season, as IlliniGuys Basketball Writer I had the time to organize my thoughts, review my notes from watching tourney after tourney via the Internet, and put together my first annual ranking of the current year's seniors-to-be. This is the fifth  and final part of the inaugural IlliniGuys recruit ranking. Let's get down to the Top 10 Basketball Players in the 2022 Class.... 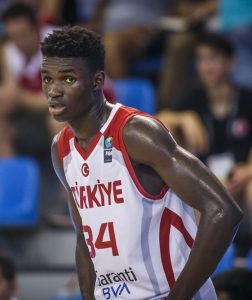 Bona is a raw, physical player who flourishes on the glass on both ends of the court. He uses his size and power to overwhelm smaller opponents for dunks and easy buckets around the rim. He’s surprisingly nimble and runs the court well for a big his size. Right now, he relies on instincts and superior athleticism though, at times, he can get caught out of position.

Bailey is a high-scoring slasher who is electric above the rim. In transition, he is a nightmare for those who cover him one-on-one as he attacks the rim relentlessly. His jumper is good in the mid-range, and has promise from the three. If he wants to take the next step in his game, his handles need to be tightened - he can be predictable as he favors going to his left hand.  Defensively, he can be a monster when engaged. That said, he often uses more of his energy offensively and coasts on defense.

George – an extremely strong scorer – excels as a shooter from deep. He doesn’t have as much athleticism as some of the other highly ranked guards, but is more polished from a skills perspective. While he has improved as a playmaker for others and as a ball handler, strengthening his contributions on the defensive end would increase his chances for long-term success. The weight room should help him greatly at the college level. As long as his jumper continues to fall from deep he should have a place at the highest level. 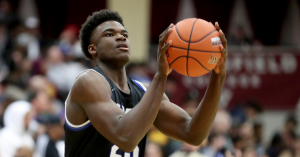 Walker is a unique athlete in this class. His combination of speed, size, and strength makes him an imposing match-up. At 6’8”, he can handle the ball on the perimeter and is a good playmaker for others when driving downhill. Offensively, his only weakness is his jumper. If he can get more consistent from mid-range and the three, he will be a force to be reckoned with. Both defensively and on the glass, he is an impact player.

Miller is a prototypical NBA wing. Defensively, he is the premier player in this class. He has versatility that should allow him to switch one through four with ease. While his offense isn’t the same level as his defense, he still shows lots of promise. He can finish above the rim, shows good touch on floaters, and is gaining confidence from the three. Even when he’s not hitting shots, he still finds a way to make an impact on the game.

Black is a point forward that can run an offense at the highest level. His basketball IQ is off the charts and he’s shown an ability in the pick and roll that should translate well to the next level. He’s another who can defend the one through four if need be. Right now, he’s most effective in transition and finding others for open threes.  Where he is underrated is his ability to post up and shoot or pass over smaller defenders. 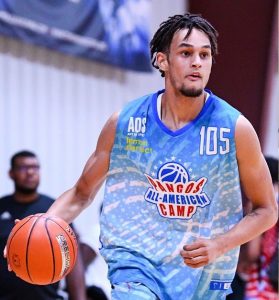 Lively is the premier upside post player in this class. His rim protection is second to none and he shows potential on switches when guarding the perimeter. Offensively, he can float a bit much for a guy his size, but he is promising as a three point shooter. When he’s attacking the rim and is active on the offensive glass is when he’s at his best. He’s another player that would benefit from time in the weight room. He should translate as a lob threat, rim-running big man.

Livingston is an explosive wing who’s demonstrated continued growth on the perimeter. When he gets going downhill he’s tough to stop at the rim. He could improve his ball handling and as a playmaker, but he should transition into a 3-and-D role regardless. On the glass is where his effort needs to be increased – especially for a player of his size and strength.

Whitehead is another physical wing. He excels in transition and getting easy buckets. He finishes above the rim with both hands and is showing more perimeter skills as well. Defensively, he is one of the most versatile players in this class. What separates him is his effort – his motor never stops, which is an indication that he will continue to improve. 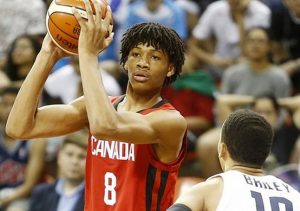 Sharpe is hands-down the best scorer in this class. He’s shown comfort from all three levels and has advanced footwork for a perimeter scorer. He has effortless athleticism which allows him to elevate over others at the rim and on his jumpers. His ball handling can be improved which means he still has room to grow. Defensively, he shows good potential for a guard as a shot blocker and has enough strength to give bigger players a tough time.