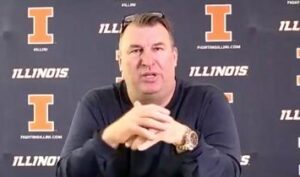 CHAMPAIGN, Ill. -- Illinois head coach Bret Bielema said Monday it was “it is in our best interest to kind of stay in that neutral mode” and not produce a depth chart before kickoff of its 2021 season opener vs. Nebraska on Saturday (Noon, FOX).

Fair enough. Bielema, who is not required by the Big Ten Conference office to produce such information to the public, also acknowledged that “obviously there are guys you know are going to start, right?” and so, the leader of the Illini program is acknowledging speculation is more than reasonable if they’re not going to control the message with a depth chart.

We at IlliniGuys.com are going to go a bit further and give you a three-deep at each position days before the Illini open the Bielema era against Nebraska, which also failed to produce a basic depth chart on Monday as well.