Nancy Fahey’s five-year tenure as the Illini women’s basketball head coach is over after Illinois announces her retirement following a 42-99 overall record in Champaign.

CHAMPAIGN, Ill. -- The five-year tenure of the Nancy Fahey era of Illinois women’s basketball has ended.

University of Illinois administration confirmed the retirement of its head coach and announced the search for new leadership of the women’s basketball program. Fahey, who was one of the first hires of Illinois Athletics Director Josh Whitman, ends her run at Illinois with a 42-99 overall record and 7-77 mark in Big Ten Conference regular season games.

Months before the 2021-22 season began, Whitman acknowledged in his annual media roundtable discussion that “high expectations” were expected for the Illini women's basketball program and “I think it's a little bit of an oddity if you look at the history of Illinois athletics, the lack of success and tradition that we have in women's basketball”.

“It's a little hard to pinpoint, to try and figure out the reasons why,” Whitman said in June of the Illini women’s basketball program. “We've brought in a lot of different coaches. We've had access to great facilities, great talent in the state of Illinois, Big Ten obviously. But it's a program that we struggled to get jump-started.”

After losing two assistant coaches this past offseason (Scott Merritt to Wisconsin and Vernette Skeete to Texas A&M), Fahey attempted to revive her staff with a connection to international basketball in Hernando Planells and a well-known name among grassroots basketball in Illinois and in Chicago with the hiring of Corry Irvin. However, the Illini suffered uncompetitive losses to in-state programs Southern Illinois-Edwardsville and Southern Illinois before Christmas and were on the wrong side of 11 total losses of 15 or more points. The Illini’s 11-game losing streak entering the 2022 Big Ten Tournament on Wednesday was the second-longest win drought for Fahey’s program since they finished her first season (2017-18) on a 18-game losing skid.

It can be argued it never got better for Fahey in Champaign than the beginning of her first season where she guided Illinois to a 9-5 non-conference record, which marked the best start to the season since the Illini last posted that number of wins in non-conference play in the 2014-15 campaign. Illinois won four of its last five games leading up to Big Ten Conference play, with the streak marking the most consecutive victories for the program since the start of the 2015-16 season.

Prior to accepting the Illinois job on March 22, 2017, Fahey spent 31 years at Washington University in St. Louis (three of which with Whitman as her boss from 2014-16), where she guided the Bears program to an NCAA record five Division III national championships. Fahey’s 779 career wins ranked her seventh among head coaches who were given opportunities at the Division I level. Before her retirement, she had third-most career victories among active Big Ten head coaches and of then-active head coaches with more than 700 victories, Fahey’s winning percentage ranks third only to Connecticut coach Geno Auriemma (.886) and Stanford coach Tara VanDerveer (.815).

Illinois will now be in search of its fourth coach since Jolette Law took over the program before the 2007-08 season following the resignation of Theresa Grentz. In those 14 seasons following Grentz’s tenure, Illinois has produced just three winning seasons and just one season (2012-13, Matt Bollant’s first season) with an over .500 record in Big Ten Conference play. Illinois’ last appearance in the NCAA women’s basketball tournament was a 72-56 first round loss to Virginia in 2003. 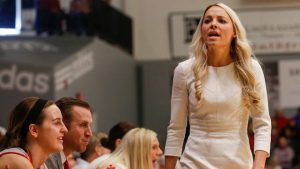 One candidate name expected to emerge throughout Whitman’s search process is Grand Canyon head coach Molly Miller. Miller has produced an overall record of 38-15 in two seasons at GCU and will be the No. 2 seed in the upcoming Western Athletic Conference Tournament starting Tuesday. Miller holds the highest career winning percentage (.892) of any NCAA men's or women's basketball coach at the Division I, II or III levels with at least five years of experience. The two-time Division II Coach of the Year ended her tenure at her alma mater, Drury University, with the D-II national runner-up finish in 2019 and an undefeated, top-ranked 2020 team when the national tournament was canceled because of COVID-19. Whitman’s wife, Hope, is also a former Drury basketball teammate with Miller, a fellow Drury University Hall of Fame recipient as well as Miller and has remained close friends with Miller to this day.