NASCAR's Johnson retiring, but with a catch

The 76-74 victory over Iowa Sunday night clinched the first Big Ten regular season title for the program since the 2004-05 season.

CHAMPAIGN, Ill. -- For the first time in 17 years, Illinois will be hanging a regular season conference championship banner. 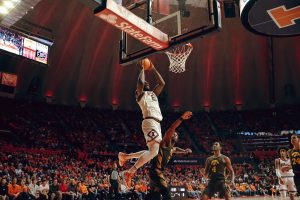 Following the 74-72 victory over Iowa in the league’s final regular season game, the Illini players and coaches were able to cut down nets at State Farm Center as conference champions. Illinois shared the conference championship with Wisconsin with a 15-5 record in league play. The shared title was made possible a few hours before the Hawkeyes and Illini took the floor at State Farm Center following the upset 74-73 win by Nebraska in Madison to open up the possibility for the shared crown.

The last time Illinois clinched a league regular season title in the final weekend of the regular season was 37 years ago on March 10, 1984, when the Illini defeated Wisconsin 81-57 at Assembly Hall to tie for the league title at 15-3 with Purdue.

Illinois now has 18 Big Ten championships all-time, winning its last regular season title in 2005. Last year, Illinois led the Big Ten in wins while playing the full league schedule but missed out on the title due to an unequal number of games played creating a win percentage differential of .024. The Illini went on to win the 2021 Big Ten Tournament.

The No. 20 Illini (22-8, 15-5 in Big Ten) have earned the No. 1 seed in the upcoming Big Ten Conference Tournament after defeating Wisconsin 80-67 in Champaign on Feb. 2. The league tournament at Gainbridge Fieldhouse in Indianapolis will begin Wednesday evening and Illinois will play on Friday (10:30 a.m., BTN) against the winner of Thursday’s second matchup between Michigan and Indiana.

The Illini’s regular season title is the program’s first since the No. 1 ranked 2004-05 squad ran through the league with a 15-1 record with the only loss being in the regular season finale at Ohio State.

Under head coach Brad Underwood (who won his fourth regular season title after taking three straight Southland Conference titles at Stephen F. Austin from 2013-16), Illinois is the Big Ten’s winningest team over the last three seasons with a 44-16 record in league play, and a 47-16 mark when including the conference tournament. The Illini’s 44 Big Ten wins since 2020 is the most in program history over a three-year stretch.

Illinois went 7-3 in Big Ten road games this season and has totaled 20 B1G road wins over the last three years, three more than the next closest team (Wisconsin, 17). Illinois has gone 20-10 during this stretch (.667), one of only three teams above .500 on the road in B1G play.