Jack Nicklaus is being sued by the Nicklaus Companies

Some NFL owners want to force Washington's Snyder out

Illinois completed its 10-shot comeback win Sunday at the 2022 Big Ten Conference Championship making this title its 12th in the last 13 events. 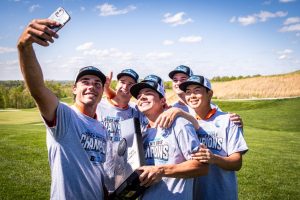 For the seventh straight time and 12th occasion in the last 13 Big Ten Conference Championship, Illinois will be taking back the men’s golf title trophy to Champaign.

The Illini men's golf team secured a league-record seventh consecutive conference title on Sunday completing a miraculous comeback from 10 strokes behind after the first round on Friday.

On a blustery day of conditions at The Pete Dye Course at the French Lick (Ind.) Resort, a course that has hosted PGA championships in previous years, Illinois defeated Michigan State by a single stroke and finished two strokes ahead of a surging Maryland squad to take home the title.

"If golf can have a 'slobber-knocker' this was it," Illinois head coach Mike Small said. "(It came down to) who can survive to the end and not make any more bogeys coming in to avoid the big numbers, and we did that at the end. You win a lot of championships in golf, specifically, by not losing it yourself and by staying steady. Under these conditions, that's about as steady as we could have stayed, and it turned out to be one (stroke) enough."

Adrien Dumont de Chassart, the Illini’s No. 1 player, kept his team in the hunt for the team title by posting a career-low 64 in the first round and Dumont de Chassart’s teammates picked up the pace in the final two days of the event to push Illinois toward the comeback victory. Dumont de Chassart was able to clinch the victory with a par on the 589-yard, par 5 18th hole.

Dumont de Chassart, the reigning Big Ten Player of the Year and also took home the 2022 Les Bolstad Award given to the player with the lowest scoring average for the season, finished second on the individual leaderboard with an even-par 216, falling one stroke shy of his second Big Ten individual championship. After his eight-under-par round to begin the tournament, Dumont de Chassart posted a 73 on Saturday and a 7-over 79 on Sunday. If he could’ve birdied the 18th hole, like he’d done each of the first two days, he would’ve shared medalist honors with Northwestern’s David Nyfjall. Nyfjall, who advanced to the round of 16 at the 2021 U.S. Amateur at Oakmont Country Club and has represented Sweden in the European Amateur Team Championship multiple times, was the only player in the field to finish the tournament under par.

Dumont de Chassart winning the Les Bolstad Award marks the ninth time all-time in program history that an Illini players has accomplished that feat but the Belgium native won it with the lowest scoring average (70.15) of any of the previous winners and the lowest average since Rutgers’ Christopher Gotterup, who transferred to Oklahoma, broke the 70-stroke barrier for the first time since Jeff Overton in 2005.

The brutal three-day conditions in Indiana produced the highest score from the individual winner and the team championship since the Big Ten Conference made the event a 54-hole tournament in 2016.

“The biggest opponent was the wind," Small said. “Putting was tough because the ball was oscillating on the greens a lot. These are good players and the scores we counted today are pretty high, so it just shows you how tough it was.”

Sunday certainly didn’t mark the last time Illinois head coach Mike Small has taken home a title from The Pete Dye Course at the French Lick (Ind.) Resort as he won 2010 PGA Professional National Championship at that track and then acquired the Big Ten Championships in 2011 and 2012 at that location as well.

“I'm just happy for these guys and the way that they put up with the expectations of a long winning streak and embrace them,” Small said. “And to come in and not have a great week, top-to-bottom, but still play solid enough to win.”

Sophomore Piercen Hunt, from Hartland, Wisconsin, was the player who starred for the Illini on Sunday as he made his way around the track for an even-par 72 to move 25 spots up the leaderboard during the round and finish the tournament tied for ninth. Illini senior Tommy Kuhl, from Morton, finished tied for 27th with a 10-over 226.

The Illini didn’t need the automatic bid but Sunday’s win automatically puts them again into the 2022 NCAA Division I Men's Golf Championship field. The regional pairings will be released on the Golf Channel Wednesday at 3 p.m. CST.