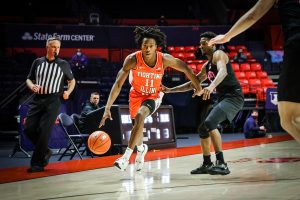 Kofi Cockburn recorded his NCAA-best 11th double-double with 21 points and 12 rebounds for the Illini (10-5,6-3), which never trailed on a night in which emotions spilled over just before halftime.

An unfortunate penchant of this Illini squad has been the early deficits out of which they’ve had to climb.  In six of their eight Big Ten games this season, they trailed in the opening minutes. But none worse than when they visited Penn State on December 23rd.  The Nittany Lions roared out to a 19-4 lead before Illinois gathered themselves and went on to post a 98-81 victory.

Nothing doing on this night. With Cockburn establishing himself from the start and scoring seven of Illinois’ first 10 points, the Illini took a 13-5 lead before the first media timeout.  Penn State (3-6, 0-5) struggled from two-point range – making only two baskets from inside the arc, but made up for it with some sharpshooting from long distance.  The Lions hit four in a row from three-point land to tie it at 17.

It would never again be that close. Trent Frazier, who has rediscovered his stroke in recent games, drained a trio of three-pointers en route to a 10-point half.  The Illini built a 41-23 lead before Seth Lundy hit five consecutive free throws to close the gap just before half.

That was when tempers overflowed. Adam Miller exchanged words with a pair of Nittany Lions and the ensuing action resulted in a lengthy delay as officials reviewed tape before slapping technical fouls on Illinois’ Damonte Williams and D.J. Gordon and Isaiah Brockington of Penn State.  Ayo Dosunmu hit one of two free throws to give Illinois a 42-28 lead at intermission.

The Illini increased their advantage to 58-36 on a Dosunmu layup and maintained a double-digit lead the rest of the way. Dosunmu ended up with 13 points and five assists on his best shooting night of the month.  The junior guard had been shooting just 33% from the field in January, but went 6 of 12 against the Nittany Lions. Frazier ended up with 13 points.

Cockburn now has 23 double-doubles in his career, including six in a row.

The defense turned in its third best performance in a Big Ten game, allowing just 34% shooting from the field. That’s a complete turnaround from their game in State College last month, when Penn State shot 54%, the best a Big Ten team has done vs. Illinois this season.

The win not only snaps a two-game slide, but it keeps Illinois two games back in the loss column behind frontrunner Michigan.

Now comes the waiting game. With Michigan State forced to cancel Saturday’s tilt with the Illini due to more positive tests for COVID-19 among its players, coach Brad Underwood is actively searching for a non-conference game to play between now and the showdown with #3 Iowa on January 29th.