Champaign, Ill. - Chase Brown rushed for a career-high 257 yards and two scores, including an 80-yard touchdown run, as Illinois defeated Charlotte 24-14 to end a four-game slide. 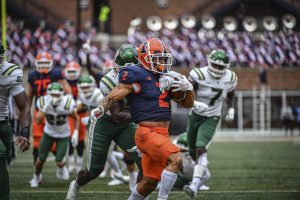 It was another slow start offensively for the Illini (2-4) as they managed just a lone James McCourt field goal in the first 25 minutes of the game.  But Brandon Peters connected with tight end Daniel Barker for an 11-yard touchdown pass and a 10-7 lead.

The advantage was short-lived as the 49ers (3-2) answered with a Chris Reynolds to Elijah Spencer TD pass on the ensuing drive to take a 14-10 into halftime.

The 2nd half belonged to Illinois and Brown.  The veteran running back, limited by injury in the past few weeks, broke through for a pair of 3rd quarter scores.  Brown's 31-yard scoring run capped a 10-play, 94-yard drive for the Illini and put them ahead for good at 17-14.  Then on the final play of the quarter, Brown sprinted 80 yards for his second score and a 24-14 lead.

The 24 points is the highest total for Illinois since they scored 30 against Nebraska and UTSA to start the season.  Meanwhile, the defense continues to improve under coordinator Ryan Walters, having now allowed just 47 points in their last three games after surrending an average of 34 points per outing in their first three contests.

The Illini now prepare for Homecoming week and a matchup against Wisconsin next Saturday.  The Badgers were routed by #14 Michigan 38-17 Saturday afternoon and come in at 1-3 overall and 0-2 in Big Ten play.