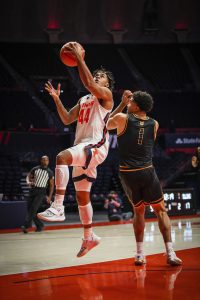 No fans.  No problem.

Adam Miller set an Illini newcomer record with 28 points, as the 8th ranked Illini throttled North Carolina A&T 122-60 in the season opener for both teams.

The Wednesday midday tilt was part of the first day of play in a three-day holiday multi-team event at State Farm Center.  The four teams have been taking special precautions for the past several days in an attempt to stay healthy amidst the global pandemic.

The affect of the COVID-19 virus was immediately obvious as no fans were allowed in the cavernous arena.  Some ambient recorded fan noise was piped in through the public address system to help cancel out the silence.

Illinois made plenty of noise on its own.   Enjoying their highest national ranking in nearly 15 years, the Illini jumped out to an early 38-7 lead behind former high school teammates Miller and Ayo Dosunmu.  The freshman from Chicago’s Morgan Park High School hit a pair of three pointers early and ended up dialing in on six of eight shooting from beyond the arc.  Miller finished with 28 points to shatter Brandon Paul’s Illinois freshman debut record of 22 points.

Dosunmu picked up where he left off 262 days ago, when the Illini stunned Iowa in what would turn out to be the final game of the 2019-20 season.  The preseason All-American posted his 2nd career double-double with a career high 28 points and ten rebounds, including back to back threes as part of an early 24-0 run.

An Achilles heel in recent years has been the Illini’s shooting from behind the arc and that concern grew when sophomore guard Alan Griffin transferred in the offseason, taking his shooting prowess with him.  But Miller appears to be primed to fill that role.  The left was smooth in his stroke time and time again, showing no signs of any opening night jitters.  Miller’s pinpoint accuracy helped the Illini go 17 of 31 from three-point range, setting a school record for most treys in a single game.

The blowout win was the most lopsided season opening victory in program history, smashing the 55-point win over Butler in 1954.  And the 122 point total was the most ever in an Illini season opening game, just four points shy of the overall school record for most points in a game, set in 1988.

The Illini return to action on Thursday at State Farm Center, facing Chicago State.  The Cougars were a late addition to the field after Wright State abruptly backed out last week due to COVID concerns.  Tip-off is 12:00pm CST.